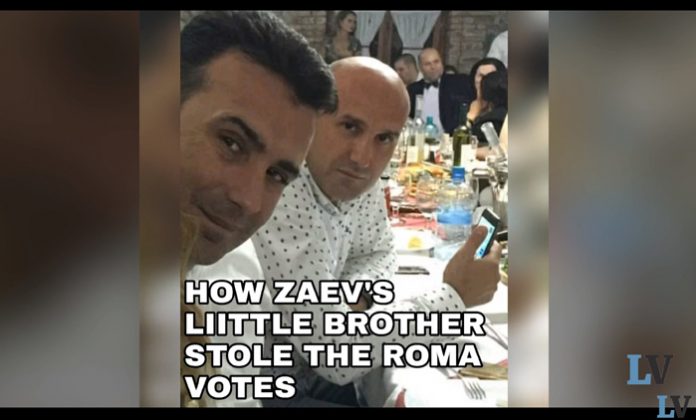 “The suspects Zoran Zaev, born 08.10.1974 in Strumica with residence on
Mladinska street, Vice Zaev born on … in Strumica with residence on Miladinov
Brothers street and Marjan Daskalovski, born on 04.05.1964 in Vasilevo, Strumica
with residence on Marshal Tito street, created a criminal group with a goal through
offering a bribe to influence on the will of voters and thus influence on the final
election result in the 2014 presidential and parliamentary elections in favor of the
SDSM political party”, this is the indictment filed in 2018 by Zoran Zaev&#39;s new
favorite prosecutor, Vilma Ruskovska, who was expressly dropped, according to the
prosecutor, for lack of evidence against the suspects, published the Kurir news
portal, reports NetPress. 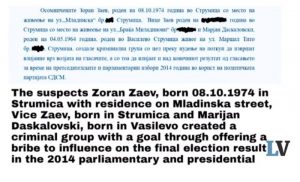 Ruskoska, who was extremely cautious about the Racket case, while not releasing
much information on the course of the proceedings over Zaev’s indictment of voter

bribery, which involved his brother Vice, says she decided not to process it to the the
court because she saw no evidence of electoral irregularities.

If Ruskovska “didn’t see” evidence the Macedonian public now has the insight to
assess whether there really is not enough evidence to convict all the suspects.
According to what the “La Verita” reveals, the evidence was obtained through
special investigative measures, that is, suspected of being involved in illegal
activities, the suspects’ communications are being monitored, and beside transcripts
the prosecution has the originals of the legally obtained recordings.

The Zaev brothers order firing of citizens who voted for VMRO-DPMNE
In talks with a certain Igor N. from Struma Prom company, Vice asks Igor if it is true
that his brother and father in law were present on a VMRO gathering. Igor confirms
so, but says he is not in good relations with them. Vice tells him not to have mercy
for them and that he will call Koce from the company where they work to fire both of
them. 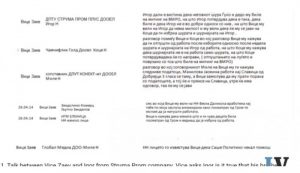 Imagine, the brother of the then prime minister ordered people to be fired only
because of their political affiliation!
Vice in conversation with Koce N. the owner of Camciglic Gold company pressures
him to fire Igor’s brother and father in law from work, to which he receives a positive
response from the company owner.
Unfortunately, this is not an isolated case in which Zaev demands firing of people, so
Vice asks Ljupco Zendelov, owner of Zendolino Komerc, to fire Vesna Dalioska she
was hired by GROM as election observer. Vice Zaev’s brutality goes so far as to talk
to Asan Asanov asking him to fire a whole family that voted for VMRO, mentioning a
certain Jasar who works as a tractor driver in one of his companies. 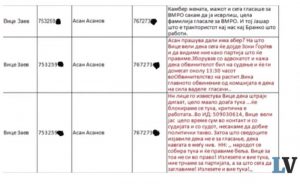 “Conversation between Vice Zaev and Asan Asanov, in which Asanov says the
whole family of Kamber should be fired “the wife, the husband voted for VMRO, I
want them out, the whole family voted for VMRO. And that Jasar, who is a tractor
driver working with Branko”.