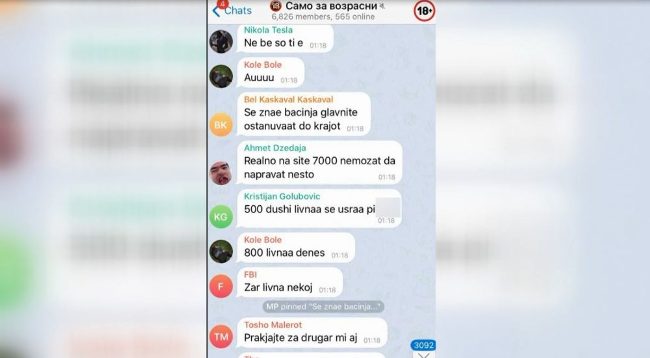 The”Public Room” group on communications app Telegram has been removed since this morning. It is not known at this time whether it was deleted by one of the administrators of the group or by Telegram, based in Great Britain, at the request of the Ministry of Interior. Police have identified one of the group’s creators and one of the moderators. These are two adults from Skopje against whom no charges have been filed yet. The Ministry of Interior confirmed that in this case they had one report from a parent whose minor daughter ended up in the group.What is known is that this group has existed for several months. It was created in September on the social media app Instagram, then switched to Viber, where it was eventually ended up on Telegram under the name “Badijaldzii” and grew into “Public Room” that had been used for sharing photos and clips with explicit pornographic content of girls from Macedonia and abroad, some of which were underage. According to the Ministry of Interior, the total number of people who were members at some time and then left was over 11,000.The Ministry of Interior, Sector for Cybercrime and Digital Forensics, in coordination with SIA Skopje identified the owner of the group “Public Room” with initials D. K. from Skopje and one of the administrators of the group with initials M. P. from Skopje. During the investigation, it remains to be ascertained who had other administrative and moderating roles in the group, police said yesterday.The Ministry of Interior announced that in cooperation with the public prosecutor in charge of the PPO, additional consultations will be held and the evidence available will be presented. The MoI will make additional analyzes of the content shared in the group, in order to identify other illegal activities and perpetrators, in accordance with the Criminal Code. In parallel, the MoI, in cooperation with Telegram, is taking actionto shut down the group and obtain other relevant evidence of interest to the investigation. The MoI appeals to the members of the group to leave on their own initiative.