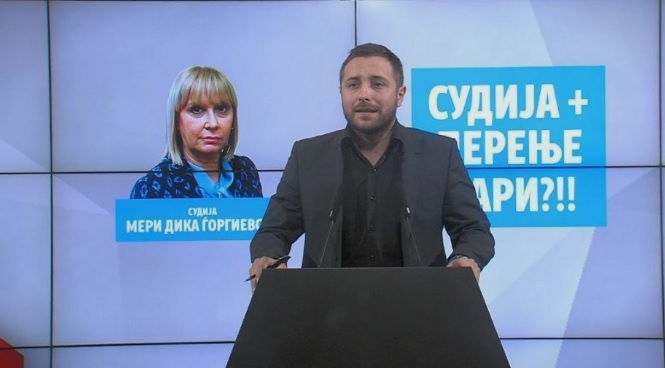 Louis Vuitton&#39;s judiciary of Zaev and SDSM have ruined the entire justice system in
the Republic of Macedonia, VMRO-DPMNE spokesperson Dimce Arsovski accused.
– Judge of the Appellate Court Meri Dika, otherwise the godfmother of the first
defendant in the &quot;Racket&quot; case Bojan Jovanovski, publicly admitted that she was
involved in money laundering in correlation with Bojan Jovanovski. Judge Meri Dika
admitted she had allowed her data to be used to refund everything Bojan Jovanovski
and his family had bought in Milan, Italy. Given Bojan Jovanovski&#39;s luxurious style,
measured in thousands and hundreds of thousands of euros, we have no doubt that
these were huge sums of money that Meri Dika had taken out using her personal
information and handed over to Bojan Jovanovski – Boki 13 and thus automatically
committed a &quot;money laundering&quot; act. She gave the money back to Bojan Jovanovski,
having in mind as I said she was spending huge sums of money on his luxurious
fashion sense. The question is whether she was aware where the money she got
and the took put and handed back to Bojan Jovanovski, came from, given that Bojan
Jovanovski has no accounts, that is, no accounts with legal money, the
spokesperson said.
Arsovski points out that with each new testimony in &quot;Racket&quot; all the actions of those
involved in the case come to light.

– Kacarska is facing up to 11 years in prison for influencing another judge and should
be immediately suspended, by Ivan Djolev. According to testimonies, Ruskovska
was involved in a 4m-euro crime. Today we see Meri Dika &quot;laundering money&quot; for
Bojan Jovanovski. As I said, bearing in mind that Bojan Jovanovski does not have
his own accounts where he has money legally obtained, that is the question whether
this money that was spent in Milan, or which used the personal data of Judge Meri
Dika, may have been obtained from racketeering. The Kacarska judiciary and the
Ruskovska prosecution are the reality of the justice system in the Republic of
Macedonia. That is why we need a law that will not allow protection of crime. Ladies
and Gentlemen, the end is near. Zoran Zaev and SDSM are to blame for all that is
happening and must be held accountable for everything that has been done in the
area of ​​criminal activities by this government, VMRO-DPMNE spokesperson said.