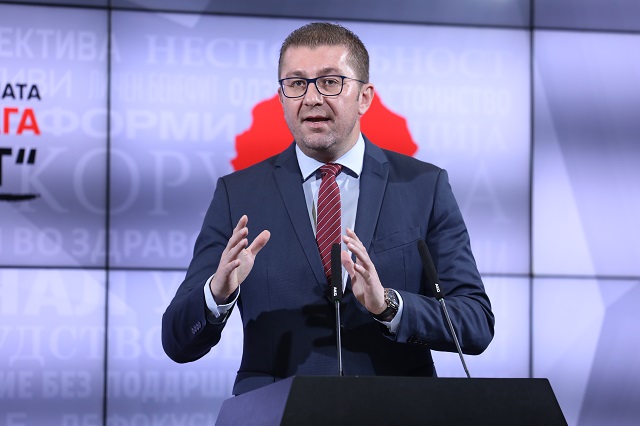 VMRO-DPMNE leader Hristijan Mickoski, in his address at a press conference on Saturday, pledged to work for the youth to have better living conditions, and made promises referring to them.- The state of our country is unfavorable. Although there were many promises, there were no results. Problems are increasing, and many have come to be before and said “we are losing hope”. Problems are everywhere. There is unemployment, farmers live on the brink of existence, doctors are unhappy, patients too. The economy is in crisis, the presence of corruption is already an established fact, as is the absence of fight against crime. Ecology is not a topic in the state, but it does not cost because it does not affect the health of our people. Emigration is huge because of poor living conditions. Young people are the most affected. I am aware that many of the things are the result of a systemic carelessness for 29 years, but it all culminated in the last 3, and the promises were different, life would come and everything had to be different. And many do not want to continue the agony set by irresponsible political elites and want a new leaf, a new beginning and a way out of thousands of problems. The problems are great, but they are not solvable. I have been working for the past 2 years and have devoted most of my time to meetings and communication with citizens and the economy. In the last year, we have been working intensively and intensively on a program and measures that we will commit to bringing about, which is, first and foremost, necessary for our society to restart. Strategic collaborators, university professors, experts from different fields, VMRO-DPMNE commissions, and the key segment were the opinion and needs of the citizens and the economy, contributed to the elaboration of our measures and projects to which we will be committed, he said.Mickoski assessed that people were overwhelmed by the politics of division, empty accusations, fake politicians. He ordered measures and projects, and a lot of work.- That’s why we are launching a series of press conferences where we will promote measures and solutions that will be part of the coming rebuild that will provide more for everyone. With the, we pledge to bring more money, more funds, more hope, more smiles. To bring more for the retirees, for the workers, for the economy and business, for the citizens and the standard, more for Macedonia.”I can freely say that this will primarily be an economic renewal, a renewal based on economic foundations for which justice will be the most important condition. In order
to develop we need more in the economy, respect for the laws and more in the living standard of the citizens.-We are committed to a renewal that will allow an increase of the average wage in the state by at least 25% in one term. That would mean more money for workers or an average of 6,500 MKD more than the salary that will be paid as an average in the state in December 2019. We will strive hard for a strong economic standard for each and every worker. We are committed to a renewal that will allow for an average pension increase of at least 20% in a single term or that will mean more than 3,000 denars more for each pensioner. For more money, for more dignity of our pensioners. We pledge to change the Law on Pension and Disability Insurance within the first 100 days of the VMRO-DPMNE-led Government and in line with the new legal solution, pensions will be adjusted on two grounds, the increase in the costof living and the average increase in net wages, he said.The VMRO-DPMNE leader also announced a drop in unemployment below 10%

Net Press (Macedonian: Нет Прес) is an independent internet news agency in the Republic of North Macedonia. Net Press's primary task is providing news, information and analyses only in Macedonian language. Net Press was founded in January 2007 and is based in Skopje.
Contact us: [email protected]com.mk
©