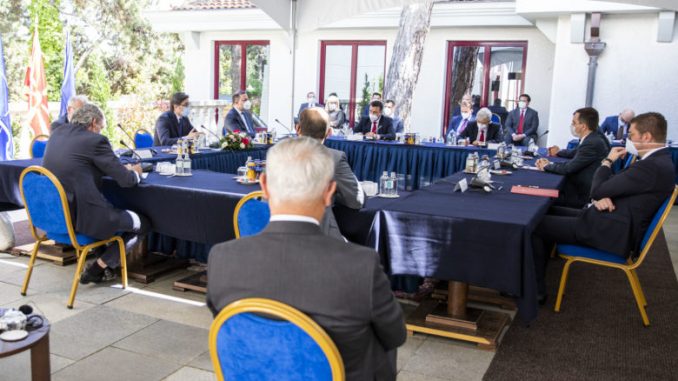 Even after the second leadership meeting within a few days, the largest Macedonian parties, the ruling SDSM and the opposition VMRO-DPMNE, came out with opposing views on the date when the early parliamentary elections should be held, continuing mutual accusations.

According to the ruling SDSM, Hristijan Mickoski is afraid of the will of the citizens in the elections.

“Frightened by the election defeat, Hristijan Mickoski continues to behave extremely irresponsibly and immaturely. Mickoski and VMRO-DPMNE are doing everything just to not face the will of the citizens. For Mickoski, the conclusions of the Committee for Infectious Diseases do not mean anything, nor the confirmatory response of the OSCE/ODIHR mission, that it is ready to monitor the holding of early parliamentary elections,” said SDSM.

Mickoski, says SDSM, went so far as to dare to knowingly lie to the public and point to Slovakia as a country without functioning institutions, even though the country held elections.

Opposition VMRO-DPMNE, meanwhile, says Zoran Zaev is rushing to the polls to mitigate his defeat.

“In three days in Macedonia, we have a black balance of 77 patients and 7 deaths. This shows that the health challenges of the corona epidemic have not only not been overcome but are being maintained at a worrying level. Zaev, Filipce and SDSM, instead of dealing with the danger to the health and lives of the citizens, their first priority is quick elections to mitigate the defeat. It is inadmissible for Zaev’s career to be more important than the life of at least one person,” VMRO-DPMNE said.

The opposition party accuses the government of making electoral bribes in the midst of an epidemic, handing out concessions for marijuana, and conducting dubious tenders.