Home Macedonia Mickoski: VMRO-DPMNE is a cause that is stronger than the aggressors of... 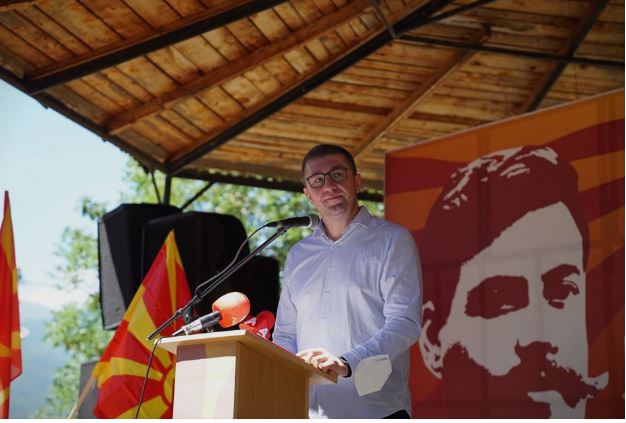 VMRO-DPMNE leader Hristijan Mickoski addressed the Struga village of Tashmarunishta on the on the observance of the anniversary of the Ilinden Uprising, August 2.
“I will start with Hurray! For “Autonomous Macedonia”, because those were the words from the Krushevo Manifesto that is a kind of gospel of the Macedonian revolutionary work.

It is the bearing code on which this Macedonian state rests and from then until today, every year it is sacred. Elijah celebrates this feat. “117 years have passed since the Ilinden Uprising and the Komitas URA for a free, independent and autonomous Macedonia and 76 years since the second Ilinden, which sealed the desire for freedom and crowned that centuries-old epic of the Macedonian people for their state,” Mickoski said.

The leader said that VMRO are not just ordinary letters – it is the “code of the Macedonian translated into letters” behind which there is a historical size, and that if one thinks that VMRO belongs to only one historical generation should know that above all it belongs to the people “To women and men, to the old and the young, to the Orthodox, to the Catholics, to the Muslims, to the Jews, and it will remain so”.

“And I will remind you that the substratum of VMRO has always been Western ideas and when many in the 19th century talked about monarchies, emperors and kings, VMRO was formed with the idea of “Republic” and because of the struggle for freedom. Exactly that fight for freedom hardened the scepter of freedom in which the greatest heroes of this country are embedded and that is why our freedom today is not a gift but hardly earned (…) and because it is a continuation of all previous aspirations and because of its courage and sacrifice stood out victory, followed by freedom and the creation of the state. “And now, all this is an obligation that obliges us to defend freedom whenever it is attacked,” said Mickoski.

He also warned that in recent years Macedonia has become “a society of false values and shallow people elevated to be moral arbiters, people who would be cast aside if compared to the values of the Western world”.

“Those self-proclaimed moral judges pretend the conscience of the society and pour hatred, create divisions, provoke, and in fact are a mask behind the inability of the ruling establishment to really deal with the problems,” Mickoski added.