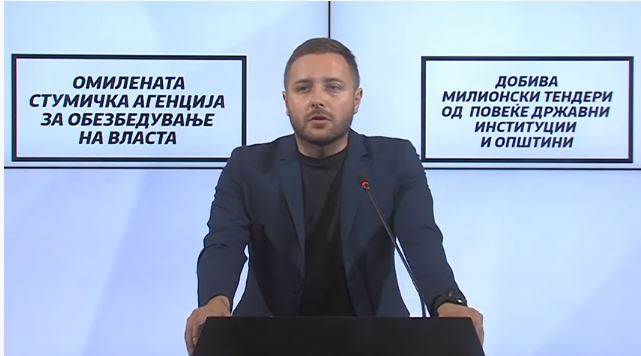 VMRO-DPMNE continues with press conferences announcing new elements of the affair for pumping money into the bank accounts of the family of the SDSM leader and former Prime Minister Zoran Zaev, through a security agency from Strumica.

Party spokesperson Dimce Arsovski said that in addition to the universal electricity supplier, municipalities and state institutions, and state-owned companies that have their own security have hired the Strumica security agency for huge amounts of money.

“The race for profit obviously made SDSM officials and the Zaev family go for unusual solutions, so SC Boris Trajkovski, who by the way has its own security service, signed a security agreement on 10.07.2018 in the amount of 10 thousand euros. It is outrageous that they signed a contract when they have their own security service,” Arsovski said.

He reiterated that the agency also received a tender from the Office for General and Common Affairs, which is under the direct jurisdiction of the Government, the Skopje municipalities of Gjorce Petrov and Aerodrom, then the Cadastre and other state institutions.

Arsovski demanded a direct answer from the Zaev family, SDSM and the security agency and called on the institutions to start working and clear all doubts about this security agency.