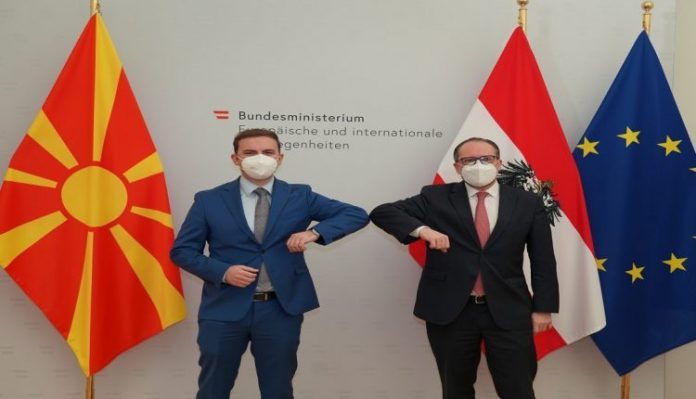 Austria is very disappointed over the failure to reach an agreement for the start of the EU accession negotiations with North Macedonia, because we believe that bilateral and historic issues should be left outside of the negotiating process. North Macedonia has done everything that was required for the start of the accession negotiations and I believe it would be fair that this happens as soon as possible, said Austrian Foreign Minister Alexander Schallenberg after a meeting with North Macedonia’s counterpart Bujar Osmani on Monday.

He said Austria was very disappointed from the lack of agreement over the start of the negotiations with North Macedonia and Albania by the end of the year.

“From our viewpoint, this was necessary. Let me be clear, our position is that bilateral and historic issues should be left aside of the negotiating process. EU enlargement is a Europeanization process, not a bilateralization one. This was our position on the name dispute with Greece while the issue was on the agenda,” said Shallenberg.

He added that North Macedonia is a model-state when it comes to the accession process, saying the country has done everything well and it would be fair to start the EU talks as soon as possible.

“You can count on Austrian support when it comes to this issue, because the Western Balkans is part of our security, culture and economic policy. We do not want to see an empty space on EU’s south map in the future,” said Austrian Minister Shallenberg.