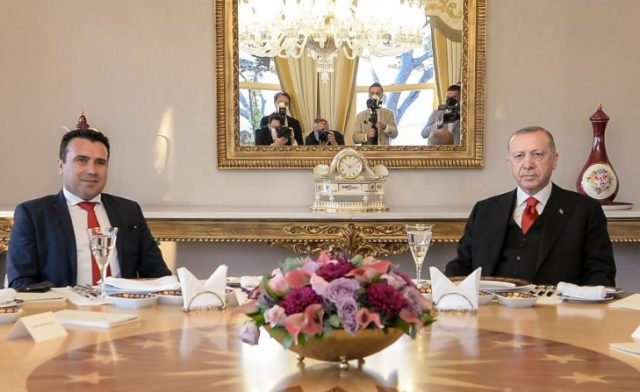 Prime MinisterZoranZaev and Turkish President RecepTayyipErdogan held a working dinner in Istanbul on Saturday and discussed the friendly relations between the two countries and deepening the cooperation in several areas, government said in a press release.

During the talks with Turkish President Erdogan, Zaev underscored the good economic cooperation between the two countries and the emphasized interest of Turkish companies to invest in North Macedonia and to deepen economic and trade ties.

“Economic cooperation and trade are crucial,” PM Zaev said, stressing that intensified dynamics is expected with new free trade agreement which is being drafted, aimed at opening new doors for Turkish investors.

“PM Zaev and President Erdogan noted that North Macedonia and Turkey, as NATO allies, share the same values in regard to peace and stability in the region, through good neighborly relations and regional cooperation, as well as in the fight against terrorism in accordance with the domestic law of both countries, as well as with international law,” government’s press release reads.

Welcoming the guests, President Erdogan said that North Macedonia has a special place in the hearts of the citizens of Turkey, as countries that have excellent relations and deep historical ties. Erdogan stressed that despite the pandemic, trade exchange between the two countries was excellent in 2020 and that he will continue to encourage Turkish companies to invest even more in North Macedonia.

According to the press release, at the meeting in Istanbul it was underlined that Turkey will continue to assist North Macedonia in the fighting the coronavirus pandemic, aimed at deepening of cooperation in the field of health care.

PM Zaev expressed hope that President Erdogan will soon visit North Macedonia, as a continuation of exchange of high and top-level visits and further promotion of the relations between the two countries.