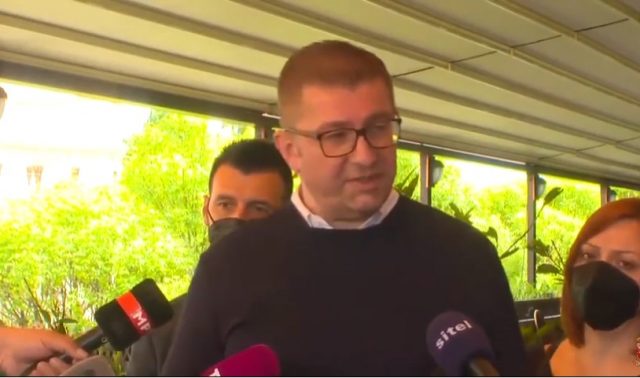 Mickoski stressed that several scenarios are at play in the development of events with Bulgaria, and the first is for Macedonia to start negotiations on June 22 without additional conditions, a scenario that according to Mickoski is the least likely.

“The first solution – the EU/EC to decide to start negotiations on June 22 without additional conditions, and with the diplomacy that follows in the next two weeks to put pressure on Bulgaria and its caretaker government to lift the veto, which will make way for the start of negotiations with the EU,” says Mickoski.

The second scenario is to accept all this orally under the pretext that Bulgaria has a caretaker government, and then the negotiations to continue with the new government.

The second solution has two subpaths. The first is the acceptance of part of the Bulgarian declaration to be accepted as part of the negotiating framework, which will enter into the “fundamentals” part. That will mean negotiations for a start or so to speak. This implies complete assimilation and Bulgarianization or abandonment of the negotiations, says Mickoski.

He also points out the danger that the Bulgarian declaration will be accepted orally, and then on the basis of those verbal guarantees Bulgaria will block Macedonia’s EU road.

“The second possibility is to accept all this orally, and then get a date, and then when there will be a regular government in Bulgaria, it will block negotiations until official acceptance of the demands of the declaration of the Bulgarian Parliament,” says Mickoski.

“For all that is being negotiated, as he says, behind the scenes, there is no need for an official agreement to be passed by the Government, but only an oral agreement. After this, Macedonia will no longer have a problem with Bulgaria, but it will have a problem with the European Union, which is a significantly more serious problem. Practically, Zaev mentioned all this in the BGNES interview. VMRO-DPMNE does not intend to accept this, nor does it want to accept the same as the Macedonian people, and not only Macedonians but also Albanians, Turks, Vlachs, Roma and all others living in Macedonia,” says Mickoski.