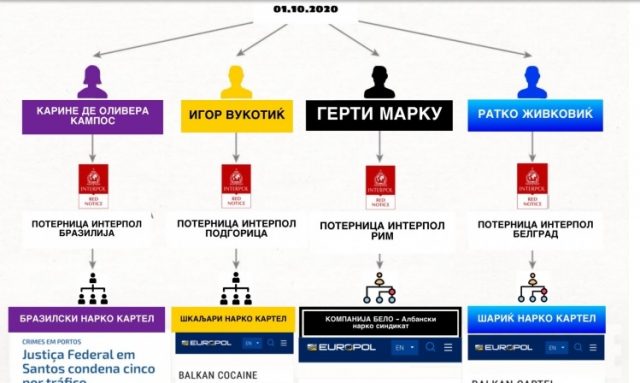 Last year, on October 1, as many as four heads of international drug cartels came to Skopje, were photographed in the premises of the Ministry of Interior, left fingerprints, received new identities and Macedonian passports. One of them is the head of an Albanian criminal organization from the “Compania Bello” cartel, for whom a prosecutor in Italy estimates that in three years he has earned 210 million euros from the sale of cocaine in European countries.

According to the indictment, on October 1, 2020 in Skopje, Macedonian biometric passports with stolen identities were obtained by the Brazilian Karine de Oliveira Campos, the Montenegrin Igor Vukotic, brother of the leader of the Skaljarski gang, the Serb RatkoZivkovic, member of DarkoSaric’s gang, and the Albanian MarkuGerti, head of an Albanian criminal organization from the “Compania Bello” cartel.

On October 1, all four were photographed by the now convicted NazdrieZekovic, who pleaded guilty, as well as the other defendants in the “Double” case.