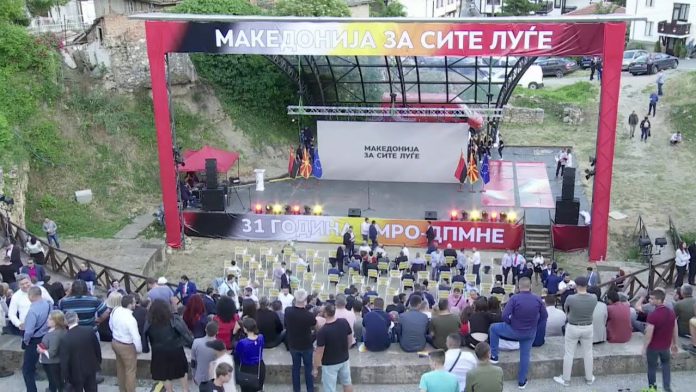 Macedonia for all is the new political strategy of VMRO-DPMNE and the world-view we will act upon. A platform that will unite all honest citizens who love their country and want to build their future here, in Macedonia. We are sharing our vision for a Macedonia that belongs to us all, away from the national and economic devastation we are now experiencing. We will defeat the immorality, kitsch and empty gestures, VMRO-DPMNE leader Mickoski said during the gathering at the ancient theater in Ohrid, where the party celebrated the 31st anniversary of its founding.

The opposition leader stressed that Macedonia was not created for castes, clicks and layers. ‘Macedonia belongs to the Macedonian people and all citizens who live freely under the same sky’, he said.

“That is why our struggle from today on is called MACEDONIA FOR ALL! We start with the novelty which means a new visual rebranding of the party. Party colors are red and black. The state colors are red and yellow. These three colors are a symbol of our patriotism and they unite us all. These are the clear colors of Macedonia and VMRO, but there are more nuances between them, which cover more categories of people. All these categories have their own specifics, aspirations, desires, capacities, needs, worldviews and values ​​that define them. But all of them, despite the possible differences that exist, all of them are united by the great love for Macedonia, their patriotism, commitment and responsibility, their diligence, honesty and ideals. And their uncompromising will to fight and win against the ruling mafia, to push the ruling mafia, to make Macedonia stand on its feet. That is why the three colors of patriotism grow into eight, which are also patriotic, in order to present that there can sometimes be differences between us, but when it comes to Macedonia, we are all one and we are all on the defensive. The goal is to present that each one is important, that each one has their own values ​​that we respect, that each one is important in this epic battle and that we all need to unite, to close the ranks, to lend a hand, to unite because we have a serious opponent who does not choose means, and who works against the Macedonian interests. We address everyone who finds their ideals in the right political spectrum of Macedonia, from the soft right center to the far right. A corps of 500,000 citizens – the core of the nation, which if united, would be undefeatable. And they will win for Macedonia. That is why Macedonia is for all people,” said Mickoski.