Home Macedonia Lefkov: SDSM’s offer in these elections is old and compromised staff that... 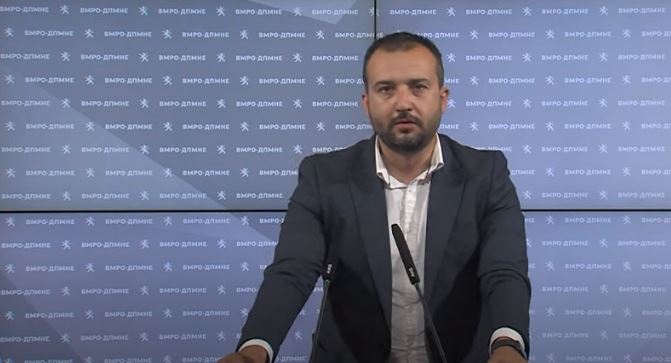 SDSM has shown that it has no plan, no vision and does not know how to manage things. They only know crime, racketeering and violence. Yesterday, SDSM as candidates for mayors took out old and worn out staff to save the crime. There are no new faces, no surprises, said VMRO-DPMNE MP Mile Lefkov.

“SDSM is entering a phase where it is clear to its members that they will lose. And no serious person dares to be a candidate. SDSM proposed for the second term the most incompetent mayor that Skopje has ever had, SDSM goes with Petre Shilegov who for the past four years has shown only lies, kitsch and parade, he has not done anything worthwhile. Shilegov sold the town house and no one knows where the 12 million euros from the sale ended up, he spent 1.5 million euros for poor quality bekaton tiles that are cracking before being put into use, in one year the prices of the parking lot have increased by 100%. Shilegov promised and did not realize a tunnel under Kale, extension of Ilinden Boulevard with a bridge over Vardar to Gjorce Petrov and reconstruction of the Universal Hall. Zaev in Kisela Voda proposes Filip Temelkovski, who started violent concreting of the settlement Rasadnik, and at the same time he did not build an alley, sidewalk or sewer line. All other candidates for mayors are outdated options. Velimir Smileski in Butel promised and did not open a new polyclinic, Butel citizens are medically treated in ruined barracks, and there is no announced fire station, there is no water supply in Ljuboten, but therefore Smileski spent 400,000 euros for party employment in the wake of a pandemic. Sashko Nikolov is the mayor of Shtip, and his relatives from Bargala behave as if the city is theirs to own. Salaries of 200 denars are paid, employees are fired, the people literally suffer for bread. Zaev proposes Aco Velkovski as a candidate for Lozovo, who saw the whole country mobbing and discriminating, but also saw him get paid as mayor, and spends half a year in Germany. Blaze Shapov from Bogdanci, is another official of Zaev who employs only by party key, and there are no new projects, because he cannot even maintain the old ones, so we see cracked streets, overgrown with grass sidewalks and quay. The situation is the same with Zhivko Gosharevski, a candidate for mayor of Resen, who instead of working spends on parties with celebrities. SDSM proposes the old Konstantin Georgievski as a candidate for mayor of Ohrid, who cannot deal with the urban mafia and who has no project. Nepotism, murky tenders and unemployment are characterized by Tome Hristovski, who has the only quality that Zaev welcomed in Krushevo after he rode a motorcycle. Zoran Zimbakov, the mayor of Bosilovo, who legalized a plot of land for the production of marijuana to people close to Zaev’s family, obviously qualified for mayor as close to the ruling mafia,” said Lefkov.