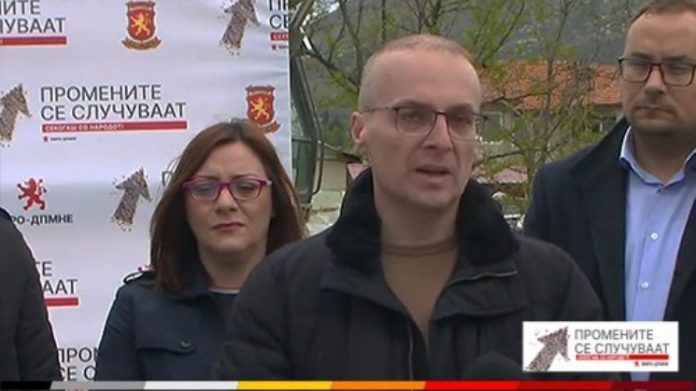 VMRO-DPMNE MP Antonio Miloshoski, during today’s visit to Veles, answered a media question related to the statements of Minister Osmani about the “Vancho Mihajlov” club case and whether he expects Kovachevski to condemn Bulgaria’s moves to promote Mihajlov’s character and work and said that the announcement of Kovachevski on Facebook, which more closely resembles the Bulgarian politician Slavi Trifonov who does not give statements to journalists and debate shows with interlocutors from the other side, but some video statements on social media. Miloshoski said that the statement of Minister Osmani confirms that the Macedonian government, Kovachevski and Osmani knew about the arrival of the Bulgarian delegation and through the Ministry of Interior and Foreign Ministry assisted in the act that happened in Bitola.
“It was a humiliation for Bitola and for the entire Republic of Macedonia and a provocation that does not bring Macedonia closer to Bulgaria or vice versa, but creates additional discord. I would just like to emphasize that what happened in Bitola as an act of insolent provocation to the Macedonian people is a consequence of the voting in December 2018 when 64 MPs of SDSM and their coalition voted to delete the decisions of ASNOM from the Constitution of the Republic of Macedonia and when you vote to delete the decisions of the Anti-Fascist Assembly from the Constitution, then these are the consequences. We as the opposition warned that the decisions of ASNOM should not be changed and deleted, but SDSM and DUI did what they did along with LDP, DOM and other coalition partners and I think that these consequences are a result of such subservient policies that brought them with 64 MPs in December, 2018. I hope that Minister Osmani will have the virtue to at least resign from this provocation that happened with his knowledge,” said MP Miloshoski.