Home Macedonia Child from the streets with one meal a day wins prize in... 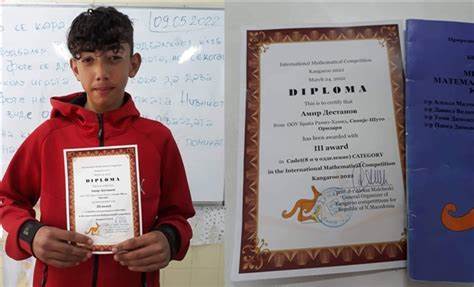 Amir Destanov, a homeless child who decided to fight the cruel fate that wanted his family to be below the poverty line and he, his brothers, sister and mother to suffer domestic violence, won third place in the “Kangaroo” math competition.
He shared the joy with the Day Care Center for Street Children in Shuto Orizari, which is currently supporting 61 children who managed to distract them from begging, enroll them in school and help them with further education and homework.
Extremely interested in mathematics, Amir completed the upgrade to go to “Kangaroo” in the Center, solving tasks with teacher Filip. When he heard that there would be a competition, he wanted to participate as well, but he did not have 200 denars to pay the fee.
Amir immediately informed the teachers Irena Velkoska and Vasilka Jovanovska, who is a social worker, and Aleksandra Lozanovska, an educator, about his desire to compete in mathematics, in the category of eighth and ninth graders. They paid him a share from their own money.
At the match, Amir did not know how he did. He told his teachers, from the Center that he was not sure how it went, because he was pressing buttons, i.e. the test was taken electronically. He wondered if he had done everything right, if he had coped or not with the click.
“But when he came with the third place certificate in his hand, we were so happy”, said Irena Velkoska, coordinator of the Day Care Center for Street Children.