Home Macedonia Mickoski: The GjorchePetrovmunicipality will get a new and first regional center for... 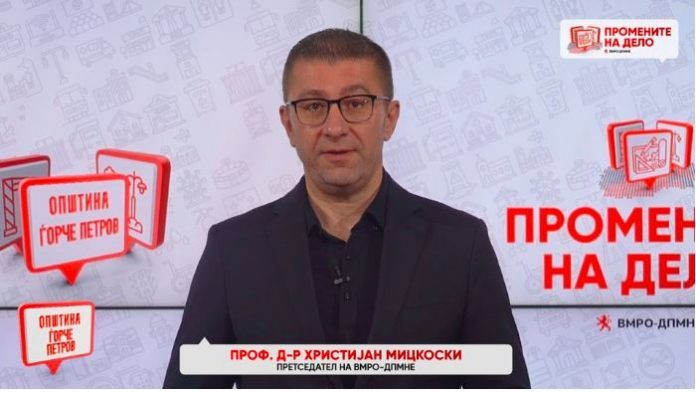 In addition, for the first time, we also conducted a public survey where everyone had the opportunity through digital form to address and say what the needs are in the places where they live, said the Mayor of the Municipality of GjorchePetrovAleksandarStojkoski in his address during the “Changes in action” campaign organized by VMRO-DPMNE.

“This year, we predicted the realization of many other capital projects. The municipality of GjorcePetrov will get more than 20 new streets reconstructed, for which we allocated over 20 million denars. According to the requirements that you submitted to us during the preparation of the budget, we are focusing on reconstructing and modernizing the children’s playgrounds,” said Stojkoski.

The VMRO-DPMNE leaderHristijanMickoskistressed that Stojkoski found a municipality with many debts and unresolved issues.

“I am aware that it must be even more and even better. That is why new 140 million denars will be invested this year for capital investments. The municipality of GjorchePetrov will get a new and first regional center for the rehabilitation of children who have fought cancer, a really important project. And many other projects will be implemented. Work is whatmakes VMRO-DPMNE distinguished. To show honestly and responsibly that there is hope and that we win in the municipalities by solving problems. For a common future, for developed municipalities,” said party leaderMickoski.