Home Macedonia About 2.4 tons of drugs worth EUR 6 million were seized in... 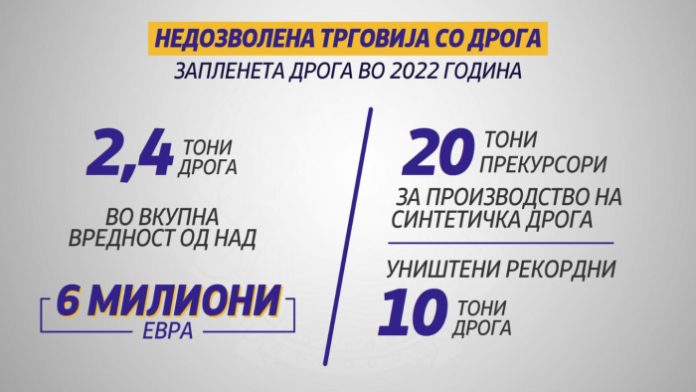 A successful year 2022 in the fight against illegal drug trade, more than 2.4 tons of drugs were seized, which would reach a total value of six million euros on the black market, said the Macedonian Minister of Interior Oliver Spasovski in a Facebook post on Tuesday.

Among the seized drugs are marijuana, heroin, cocaine, amphetamine and hashish. 12 organized criminal groups consisting of 51 members were suppressed. Over 700 crimes have been discovered, Spasovski wrote, for which over 800 perpetrators have been reported.

“Here are also the seizures of 20 tons of various precursors, with the aim of further production of synthetic drugs. Worthy of mention is the seizure of one ton of precursors at the Skopje airport from which amphetamine worth more than 50 million euros could be produced,” the Minister of Interior said in his post.

At the same time, concerning ​​illegal drug trade, Spasovski informed, the largest destruction of seized drugs was carried out, a total of 10 tons of drugs, in 2022.