Home Macedonia Mickoski tells DW: I have been informed about two types of threats... 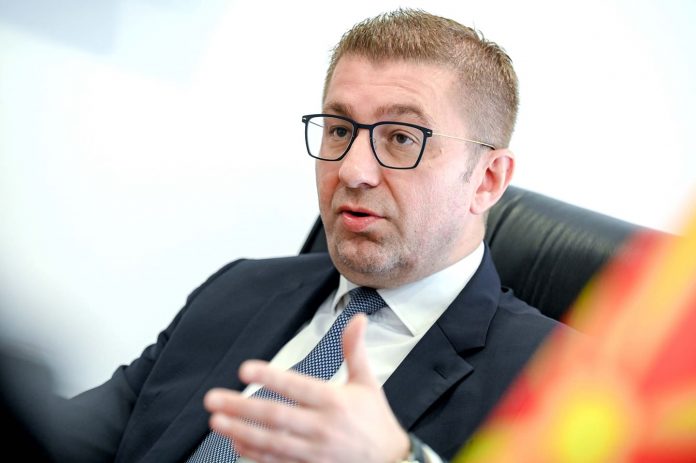 One type of threat is direct, and the second is through intermediaries, said the leader of opposition party VMRO-DPMNE Hristijan Mickoski, while describing the pressures on MPs from the majority, which he spoke about in Ohrid on Thursday.

What pressures are there on MPs from the ruling coalition who would support elections, as the VMRO-DPMNE leader said yesterday? In a party reaction, SDSM denies and accuses him of “lies”, but Mickoski sticks to the same claims. DW asked for a reply from the leader of VMRO-DPMNE – What kind of pressures are we talking about?

There are two types of threats that I am informed about – one is direct, in the sense that bad things will happen to you and your loved ones if you support elections, and the second type of threat is through intermediaries of people close to those MPs, their relatives and friends. It is good that the majority is encouraged and directly testify to such an attitude I am convinced that they will remain consistent, because the fight for Macedonia has no price, and the criminals will one day regret what they are doing, says party leader Mickoski.

According to Mickoski, some of the MPs who are subject to processing shudder, but they also disappointed by such an approach.

“More and more MPs realize the complexity of the situation and the fact that elections are the only sustainable solution to the situation. In that direction, in proportion to the growing number of MPs who are encouraged to speak about the need for elections, brutal, and I would say bandit pressures by criminal and informal groups in the form of intimidation are taking place, as a direct message from the SDS and DUI leaderships. These are members of the same groups, who have been building a business empire for the past six years and are protected from persecution and the touch of justice. These are the same people who greet each other semi-secretly, and some of them publicly take photos with the same leaders of the government at party and other political events, have thick police records and are still at large despite dozens of cases for working with illegal substances, rackets and extortion,” said the VMRO-DPMNE leader.