Home Macedonia Vankovska tells SPO prosecutors to give the money back 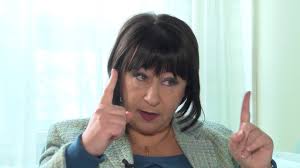 For those of us who recognized the trickery of Katica and her prettier half /thirds since day one, we knew that the institution was UNCONSTITUTIONAL, that it used press conferences for marketing purposes, that it had more drama and acting than legal knowledge and skills, that has inappropriate connections with politicians, journalists and activists we knew were lying to get money for an apartment in Skopje, for those of us who saw nepotism and clientelism in the SPO –

The information about illegal bonuses and the arbitrary sharing of money from the unbelievably large budget and the corruption of public office holders is just the last drop that made the cup run over!

Goran Mihajlovski is manipulating the news in vain. Only in their colorful narrative Katica and her associates could be heroes and avengers! Any reasonable person has long recognized that she is a caricature and a travesty of justice. Now we see how much we paid out of our own poverty! I feel angry and humiliated because of the poor, because this was the “justice of the rich” who eventually settled at the table of sharing profits.

GIVE THE MONEY BACK! Professor Vankovska wrote on Facebook.