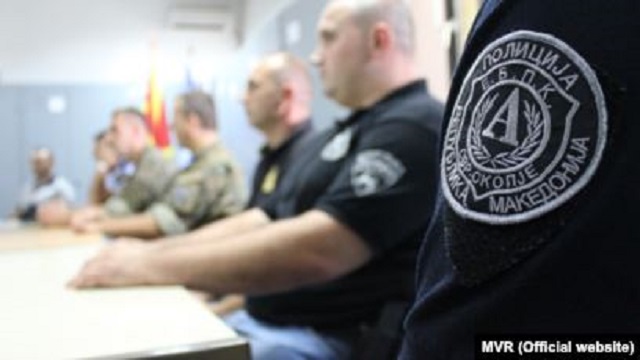 The abolition of the Alpha police squad, and its merger with the Public Order and
Peace Unit, has prompted a series of speculations in the public, especially as this is
happening right before the upcoming parliamentary elections.
Interior Minister Oliver Spasovski pointed out that the merger of the units is following
the example of many European countries, whose ultimate goal is greater visibility
and police activity on the ground. These two units will work as a separate
intervention unit.
But at the very beginning, the first problems and dissatisfaction among former Alfa
members have already occurred, as the new transformation has reduced their
special allowance from 45% to 25%.
Two days ago, on the proposal of the Ministry of Interior, the Government adopted
an amendment to the Uniform Regulations and Uniform Labels of the new
Intervention Police Unit (IPU).
The new emblem, as can be seen from the photo below, does not state the name of
the country in which they operate, as is common. In fact, from the uniform
designation of the new Intervention Unit, one cannot identify the MoI specifically
concerned.
This uncertainty definitely points to other current issues Macedonia was facing in the
past, especially after the formation of the current ruling coalition.
This is how the previous Alpha uniform badge looked like:

The new IPU, as informed by the government press service, will be responsible for
monitoring the situation in the field of public security in the area of ​​the Sector of
Internal Affairs and taking actions and measures in the field of public order and
peace, preventing crime and acting on demand for assisting in the enforcement of an
executive decision.
The Alpha police officers operated undercover on in the suppression of street crime
and used unmarked vehicles. The unit was established in 2005 under the authority of
the Ministry of Interior.

Namely, according to connoisseurs of this issue, the Alpha squad has proven to be
capable of controlling local sheriffs, which the SDSM now intends to use in ballot
stuffing and intimidation of the population.