Home Macedonia City of Skopje to clean up trash under Kale, 15,000 euros fine... 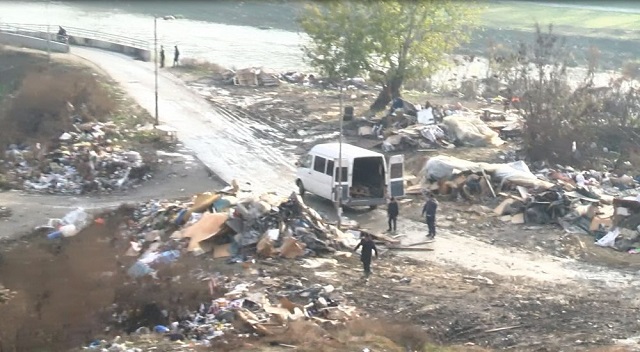 The city of Skopje has begun cleaning the landfill beneath the Kale, which for years
has been turned into a wild settlement, where tires and cables were burned and
about 200 people lived. The city, along with the Ministry of Labor and Social Policy,
relocated them to Vizbegovo a month ago. This area where garbage and waste has
been accumulating for years has started to be cleared out yesterday, reports
SDK.mk.
In the clearing beside teams from the City also participate socially responsible
companies that with their mechanization help to collect waste and transport it to the
Drisla landfill. In the first two days of the action, 500 meters of rubbish was collected.
&quot;In 10 days the space will be completely cleared. This place is privately owned by
Amadeus Group, as well as this entire side of the quay. This is the last time the City
of Skopje intervened at this location. Once we have cleared the space completely
and brought it back to normal we will be rigorous in imposing penalties. All owners
have been notified in writing that if they do not care about the space they purchased
and allow it to grow into a landfill they will be fined, and the fine is 15,000 euros&quot;,
Silegov said.
Silegov said that in the coming period the city will work on clearing landfills in
Vizbegovo and Vardariste.
&quot;I expect this year, along with the Ministry of Environment, to begin resolving a 30-
year-old landfill in Vizbegovo. Vardariste is a complex issue that improvisation does
not allow since it has been a landfill of the City of Skopje where waste has been
deposited for more than 40 years and we will need expertise and international
assistance here. Estimates of repairing the situation there indicate that around 40
million euros are needed to fully protect the move&quot;, Silegov said.