Home Macedonia What more should happen so that this prosecution starts looking for evidence... 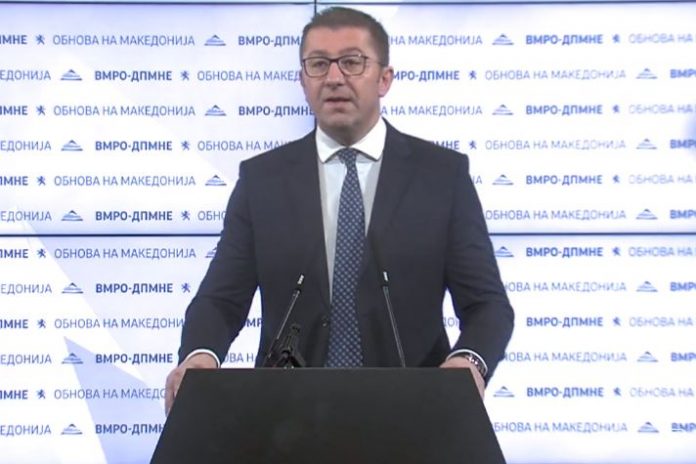 What more should happen so that this prosecution starts looking for evidence of crime with the government, VMRO-DPMNE leader Hristijan Mickoski said on Monday, recalling a recent statement by Prosecutor Vilma Ruskovska.

As the opposition leader estimates, it is precisely Ruskovska’s statement that a law on an independent prosecution is necessary and evidence of the politicization of the current prosecution.

“The prosecution once again assumes the role of the protector of the crime of power.
Ruskovska has become a protector of Zaev’s scandals.

The 2014 bribery case was “by accident” opened in 2018 and closed for lack of evidence. And now we have to trust Ruskovska that Zaev is innocent in the whole case, when it is a public secret like SDSM and Zaev provide support in Strumica not only in 2014 but also in the elections before, but also after. I have spoken of such a feudal system with slave-like characteristics on several occasions where the “leader” blackmails the powerless and rackets the rest”, wrote Mickoski.

The VMRO-DPMNE leader also points out the timing of the closing of the case in which the central figure is the former prime minister and current leader of SDSM.

“This bribery case is open and closed in 2018 because Vilma Ruskovska was the prosecutor, and Zaev was prime minister and only Zaev could be left untouched. She opened it to shut it and hide it away from the public eye. After all, it is now clear that the prosecution is the guardian of the current government’s crimes. Should I count them, Racket 1, Racket 2, Racket 3, Bribery, Bloody Tenders, SPO’s Affair Cash, Cannabis millions for the government. The blindness to the current prosecution’s crime can only be eliminated by a quality prosecution law. And Zoran Zaev’s defeat in the upcoming elections. Until then, various Vilmas and Joveskis will convince us of the unconvincing”, concluded Mickoski.