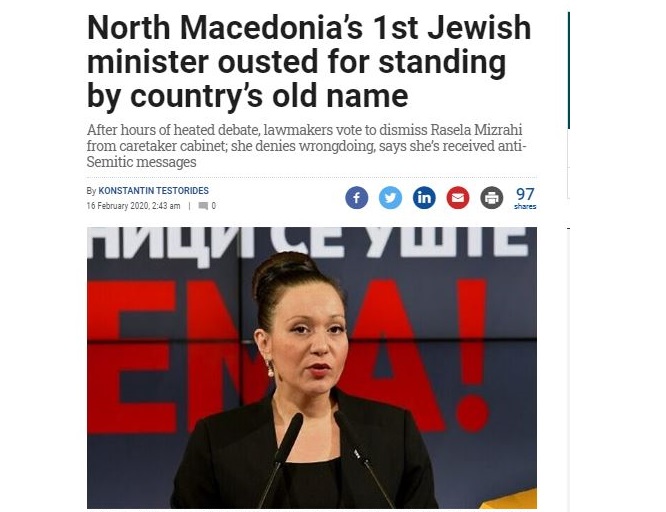 North Macedonia’s parliament voted to dismiss a government minister Saturday after she appeared at two news conferences in front of a large wall sign bearing the country’s old name, Republic of Macedonia, and refused to change it, reports The Times of Israel.

The article continues that Prime Minister Oliver Spasovski, who is leading a caretaker government appointed last month, said he recommended the removal of Labor and Social Policy Minister Rasela Mizrahi because she “deliberately and consciously breached the laws and constitution” and “endangered” North Macedonia’s Euro-Atlantic future.

After six hours of heated debate that ended before dawn, lawmakers voted 62-26 to dismiss Mizrahi from the Cabinet of technicians that is serving before an early election set for April.

Mizrahi denied doing anything wrong, telling lawmakers Saturday that her predecessor at the Labor Ministry never removed the sign after the country’s new name of North Macedonia became official in February 2019.

The Times of Israel wrote that Mizrahi also reported getting many “anti-Semitic” reactions to her actions over the sign. Mizrahi is North Macedonia’s first government minister of Jewish descent.