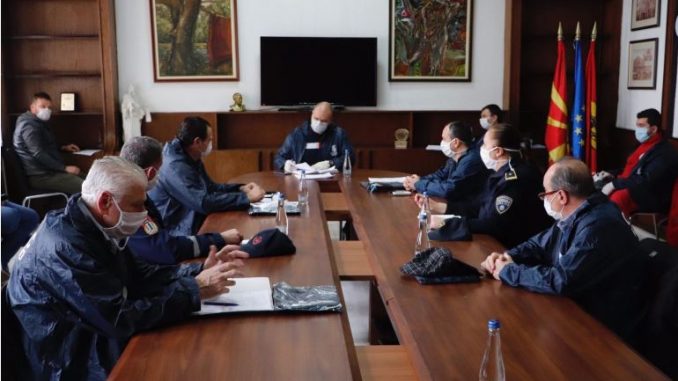 At today&#39;s session, the Municipal Crisis Headquarters of Kumanovo asked to see the
number of patients in the hospital and to determine the capacity of the institution in
this condition. to appoint a person from the MLSP who will be involved in the work of
the municipal headquarters.
At today&#39;s 21st session, the Municipal Crisis Headquarters of Kumanovo requests
from the Commission for Infectious Diseases in the Ministry of Health to make an
overview of the situation in Kumanovo General Hospital for the number of positive
cases in the hospital by departments and to give its opinion on the functionality of the
hospital&#39;s capacities in these circumstances.
– We ask the Ministry of Foreign Affairs to provide us with a list of persons from
Kumanovo, who have been announced to return to the Republic of North Macedonia,
reads the headquarters’ statement.

VMRO DPMNE leader Hristijan Mickoski claims that the government&#39;s measures are
not enough to prevent the spread of coronavirus. He called for more people to be
tested at a news conference, adding that more lives could be saved. Mickoski
believes that the government&#39;s economic measures are not enough and that they are
more declarative than effective, as well as unfair to certain companies. He reiterated

that the other day he offered himself to go to the Government and offer the expert
analysis and proposals of VMRO-DPMNE.
&quot;Because I see that she needs the help of the government, the lack of sincere will,
and I see that they do not even understand the things they need to do to save the
economy. I am really sorry that no one has found enough responsibility in
themselves to suppress the unnecessary political arrogance and to listen to what we
are proposing,&quot; Mickoski said.
He reiterated the party&#39;s view that companies should receive up to 50 per cent
support for gross costs per employee, then reiterated that they should pay the
employers&#39; payments into the second pension fund into the first mandatory April 1
fund and thus secure liquidity of the first mandatory fund, and in better times to
return them to the second pension fund.
The treasury bills in the National Bank should be urgently transferred to all or part of
them and recorded in securities, thus providing 25 billion denars of injection for the
Macedonian economy, and then let it continue to seek out money to repair the
damage from the pandemic, asked Mickoski. He also demands reprogramming of
the state debts, i.e. the Government to start negotiations with the lenders of the
state, for what we should return this year, to be postponed for next year.