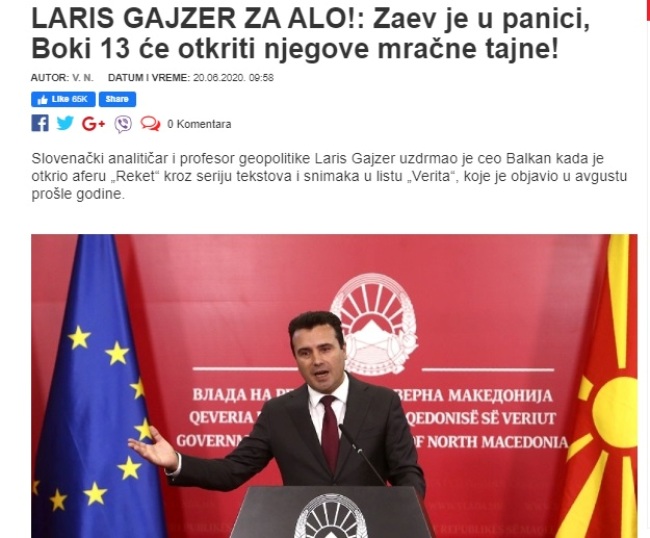 Slovenian geopolitical expert and publicist Laris Gaiser, who published some of the main revelations leading to the major “Racket” affair, says that the verdict in the case is just the beginning of the scandal. In an interview with Serbian news outlet Alo, Gaiser says that the scandal leads toward the political top.

However, he added, we cannot expect the perpetrators to condemn themselves.

“Ultimately, even the Public Prosecutor’s Office was run by the same people I found to be linked to a huge mafia octopus developed during the rule of Zoran Zaev,” Gaiser said.

Asked if he expects new charges after Boki 13 and Katica Janeva’s verdict, Gaiser believes that this will change after the elections in Macedonia, especially if Trump wins a second term.
“These past months Zaev wanted the elections to come as soon as possibly as he is petrified of the possible sentence. He took a sigh of relief as the elections were set, but after Boki 13’s statement before the court, the second round begins. With a change in the political environment and a purified judiciary, I’m sure that Boki and Katica will find the courage they need to tell the whole story,” Gaiser said.

According to the Slovenian journalist, former Prime Minister Zoran Zaev became insignificant in the international stage in August last year.

“A year after my articles nobody alive believes in Zaev’s innocence. His continued leadership of the SDSM party condemns them all to an electoral defeat. Zaev is finished in the political scene, with or without further criminal investigations into him,” said Gaiser.