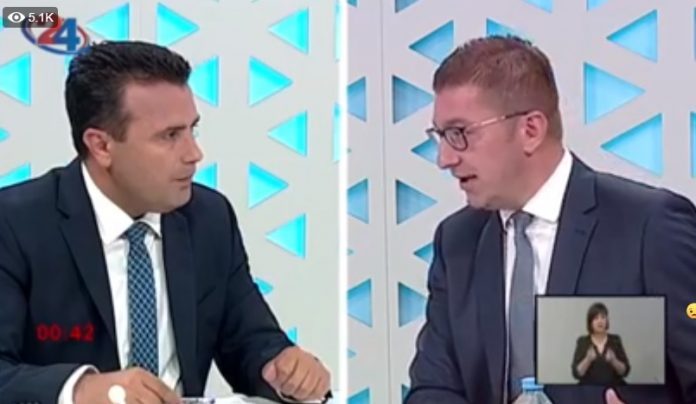 The TV duel between the leaders of the two largest parties in the country once again did not bring a real presentation of the election offers that Hristijan Mickoski and Zoran Zaev were supposed to present, thanks to the strategy applied by the SDSM leader, to prevent a real discussion on key topics.

The leader of VMRO-DPMNE, apparently guided by the impressions of the audience after the previous such confrontations, which were irresponsibly in favor of Mickoski, sought to preserve the level of debate, worthy of the persons aspiring to lead the country. At the same time, Mickoski demonstrated stability and concentration of topics that are of great importance for the future of the country.

As opposed to him, SDSM’s PR, covering for Zaev’s shortcomings, the tendency to make arbitrary statements and, above all, promoting selfishness as an inviolable master of gaffes, clearly limited his leader’s performance to direct targeted attacks on the political opponent at the level of questioning. The aim was unequivocally to insult, accuse, and interrupt his interlocutor’s talking to “waste” time in which the views on crucial issues were to be elaborated.

This was best noticed at the moment when the  leader of VMRO-DPMNE, at last night’s debate on TV 24 TV, asked Zaev if he would admit in front of the Macedonian public that he would give up Goce Delchev, to which Zaev refused to answer.

While Mickoski pointed out the weaknesses in the system with surgical precision, Zaev who has been in power for three years demonstrated that he had no vision for the future development of the country, and that in the past he had only led the disaster. Due to the nervousness Zaev failed to conceal, he stooped to a lower level of debating and started using abusive expressions toward his interlocutor.