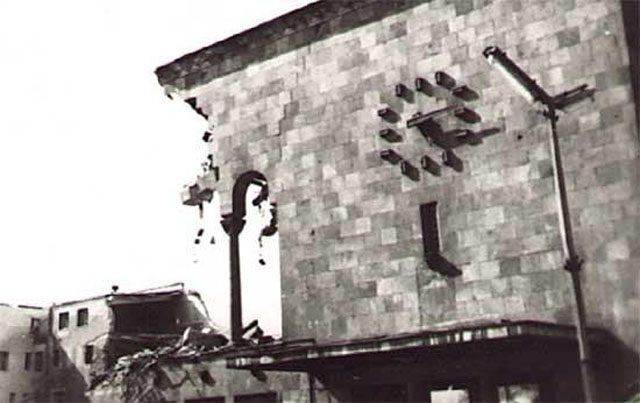 Skopje marks Sunday 57 years since the disastrous earthquake, which leveled much of the city on this day in 1963, killing 1.070 people and leaving 3.000 injured.

Delegations and individuals will lay flowers at the monument of the earthquake victims at Butel cemetery. The City of Skopje and the public cultural institutions will traditionally organize a number of events.

The earthquake, which measured 6.1 on the moment magnitude scale, equivalent to 6.9 on the Richter scale, occurred on 26 July 1963 at 5:17 am local time. The tremor lasted for 20 seconds and was felt mostly along the Vardar River Valley. Smaller aftershocks were felt until 5:43 am.

More than 15.000 homes and apartments were destroyed in the quake, and 28.000 were damaged. The disaster left 200.000 people homeless, many of them forced to seek shelter across Macedonia and then Yugoslavia, the others waiting in improvised tent cities until prefab housing was made available.

Countries from around the world helped rebuild the devastated city, in a completely new architectural style and layout, with several large new urban zones added to the east, west and north. The United Nations coordinated the support effort and countries helped with resources and personnel.

On October 14, after a two-hour discussion, the United Nations General Assembly unanimously adopted a Resolution to assist the Yugoslav government in the reconstruction of Skopje. The Resolution expresses regret over the great catastrophe. In the debate on providing assistance to Skopje, the General Assembly listened to the speeches of representatives from over 20 countries from all continents. That day remained as the Skopje Day in the United Nations.

It is believed that the 1963 earthquake was at least the third time Skopje was destroyed in this fashion, with records of catastrophic quakes in 518 and 1555.