Home Macedonia VMRO-DPMNE and DUI are finalizing the negotiations for the government, say Albanian... 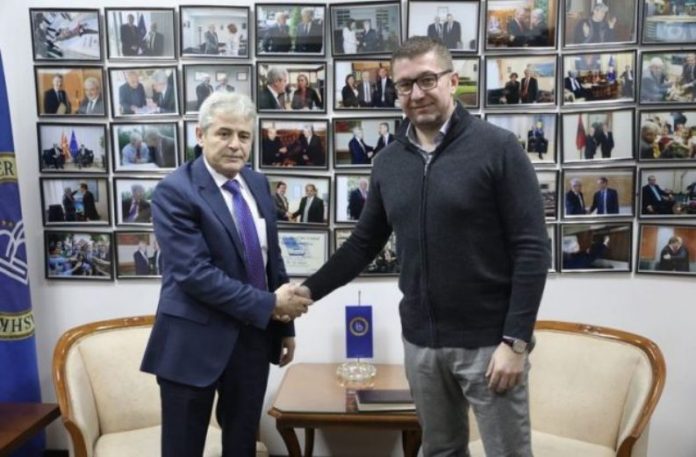 VMRO-DPMNE and DUI are finalizing the negotiations for forming a government, the Albanian language internet portal “Lajm” announced, citing a source from VMRO-DPMNE.

According to the media, part of the agreement between HristijanMickoski and Ali Ahmeti is to elect the former Minister of Defense, Laze Elenovski, as Prime Minister, who in a way meets the request of DUI for an Albanian Prime Minister. Elenovski is of Albanian descent on his mother’s side.

“Lajm” reports that what remains is for Mickoski to convince the leader of the Levica party DimitarApasiev to support this government coalition.

The information, in addition to “Lajm”, was published in several other media in Albanian and all state that such an agreement would not cause revolt in the membership of VMRO-DPMNE, because it is clear that the declaration of Elenovski as an Albanian “is only for the needs of daily politics”.

“Officially, both sides will not confirm this information without reaching an agreement with Apasiev,” the text reads.

VMRO-DPMNE and DUI in the Assembly together would have 59 MPs, and if Apasiev agrees to give support they would have the votes of 61 MPs necessary to obtain the mandate to form a government.

By the way, after leaving the position of Minister of Defense, Elenovski was Ambassador to Brussels, and then a special envoy of the Government in NATO. In the run-up to the 2014 presidential election, there was information that he was DUI’s proposal for a consensual president.