Home Uncategorized Andonovski: Will the Macedonian side make concessions to Bulgaria with a declaration... 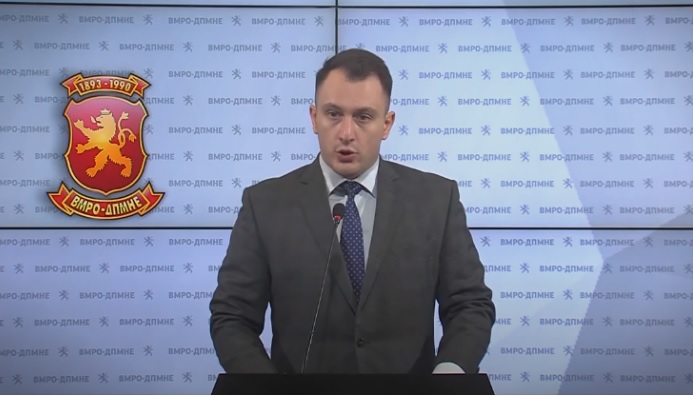 Macedonia and the Macedonians are pushed into a new national humiliation of the highest rank, said VMRO-DPMNE’s Stefan Andonovski at a press conference on Friday.

After SDSM blamed VMRO-DPMNE for literally everything for several days, Zaev said at the virtual congress of SDSM that a statement, declaration or amendment to the Agreement with Bulgaria is still being prepared. No public, no experts, no commission. Three days later, a government spokesman denied the allegations. Yesterday, Zaev came out with the position that there will still be no declaration. But another time Zaev said one thing, and behind the curtains he did damage to the Macedonian interests. We demand a clear position from the government. The various announcements that there will be – that there will be no additions and annexes, irritate the citizens. Macedonian diplomacy should not be silent and hide, but should react to the negative attitudes coming from certain circles in Sofia. It’s too late. We ask, what is the position of the Government? With a declaration or an annex, will the Macedonian side make concessions to Bulgaria in terms of the Macedonian language and Macedonian history?” Andonovski asked.

He adds that these days, reputable European media write about the so-called Macedonian compromise, according to which the Macedonian side should recognize the Bulgarian roots of the Macedonian identity and language. The ambassadors in Brussels say that we should recognize the Bulgarian “historical truth” and all the theses of Bulgaria. Bulgaria’s radical views that the Macedonians are a creation of the Comintern should be accepted as a green market for raising the bar for the start of negotiations with the EU. And if Zaev accepts that instead of an occupier in Macedonia there was a Bulgarian administration, it directly means acceptance of all Bulgarian assimilation policies.