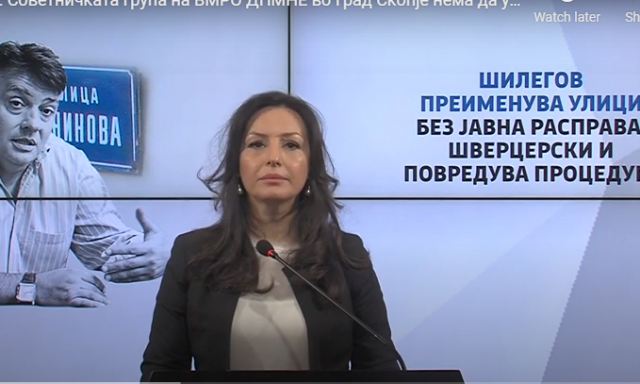 Petre Shilegov in the height of the biggest health and economic crisis has as its top priority the renaming of the streets and the identity depersonalization of the city of Skopje, says the councilor in the Council of the City of Skopje from the ranks of VMRO-DPMNE Irena Popova.

According to Popova, the current mayor is renaming the streets without a wider public debate or, as she said, smuggling and by violating procedures.

“The proposals on the table are an expression of Shilegov’s frustrations and bargaining with DUI at the expense of the interests of the people of Skopje.” The proposals given by Shilegov were not approved in accordance with the law by the municipalities and they were returned by the Government. So, the procedure is violated. This rampage continues today when at a session of the Commission for naming streets, bridges, squares and other infrastructure facilities, proposals were put that were not approved by the municipalities in the city of Skopje,” said Popova.