Home Macedonia When the government falls into a political crisis, it always blames the... 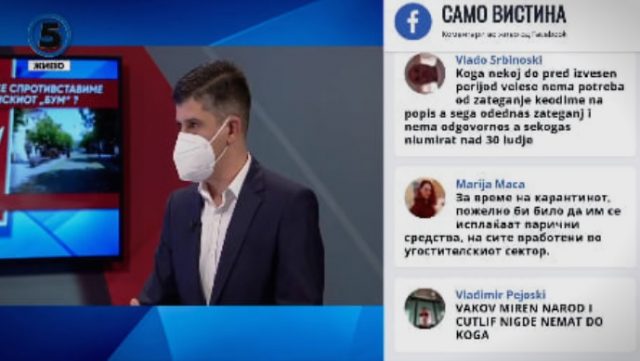 These measures that you said are absolutely late because we can only see the contradiction in the policies of the government which until a week ago did not convince us that we should make a field census, for today the Prime Minister ZoranZaev to come out and say that the situation is alarming , that the citizens must adhere to the measures, that there must be restrictions, and only until five days ago he did not convince that it is okay for people to enter your house to register you, who will pass another 40, 50 homes, says columnist Nikola Srbov.

“Secondly, Macedonia is a country among the ten countries with the highest mortality. This does not mean that the government is handling the situation well, but on the contrary it says that the government is extremely badly handling the situation. Furthermore, Macedonia has not procured a single vaccine so far, we have received everything we received as a donation, primarily from Serbia,” Srbov added.

Srbov believes that instead of the government spending the money on a pre-election bribe six months ago by handing out vouchers, it could have saved that money and used it for the appropriate needs of the citizens, asking how the people working in the catering facilities will be compensated. today with the new restrictive measures the government decided to close them.

“Now restaurants and cafes are shutting down and we have hundreds of thousands of citizens living from those businesses, how will the damage to those people be compensated. We are not talking about extra profit but about those people being able to survive that closure. Instead of spending money six or seven months ago on election bribes and handing out vouchers to rallies, the same money could have been used for appropriate purposes,” he said.