Home Macedonia In front of the monument of his grandfather Metodija Andonov Chento, Jane... 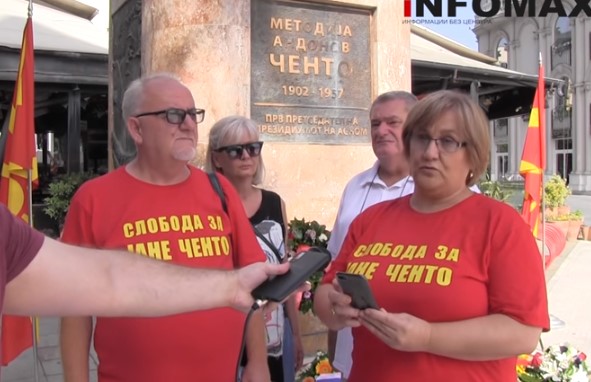 On that occasion, the memory of Metodija Andonov Chento, the first president of the independent Republic of Macedonia, is celebrated. At the invitation of Talat Xhaferi, today at the monument of Cento in the center of Skopje, flowers were laid by the family of Chento, namely the mother and father of Jane Chento, who was unjustly sentenced as well as his grandfather to many years in prison for the events on April 27.

In a statement for Infomax, his mother sent a powerful message, but also congratulations to all Macedonians on the occasion of Ilinden: This day is a great holiday for the Republic of Macedonia, this holiday should unite us all and finally come to a true national reconciliation. Hence, in front of the monument of my grandfather Metodija Andonov Chento, I call on all political elites to gather strength and show that reconciliation is not just empty words on television. Today we stand in front of the monument of the man who was unjustly sentenced to many years in prison for the Republic of Macedonia, and then rehabilitated. Today, my son Jane Cento is also sentenced to many years in prison just because he loves Macedonia. Huge damage and great injustice have been inflicted and that injustice should be corrected an hour soon. Do not allow re-rehabilitation to be too late. We call on the politicians to gather strength and through the case of the events of April 27 to end the Macedonian divisions, to forgive each other and move forward.”