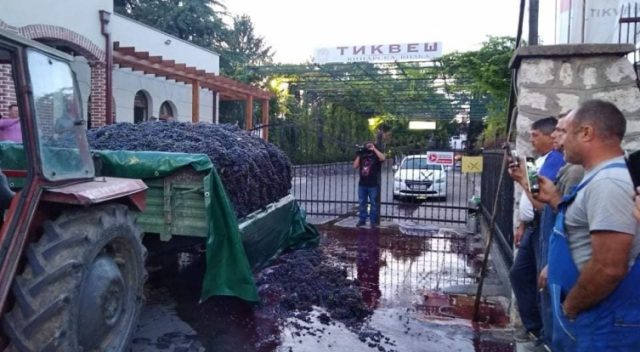 The grape growers, as they say, dissatisfied with the manipulative attitude of the winery, started a protest in front of “Tikvesh” on Saturday afternoon, and according to the videos posted on social media, they stormed the winery.

Kavadarci growers could not hand over their grapes to Tikvesh Winery due to the increase in sugar content when receiving from 20 to 21 sugar units per side, due to which the grapes under 21 malignant were not purchased.

Many grape growers received invitations to pick “Kartoshija”, but after arriving in front of the cellar with full tractors, they were told that the grapes would not be bought if they did not exceed 19 malignant.

Then for the grapes with 19 malignancies and less they were offered a price of only 8 denars per kilogram. It overflowed its glass and the growers started pouring the grapes from the trailers in front of the entrance of the winery.

Earlier this week, the Minister of Agriculture ArjanitHoxha promised the growers that all the produced grapes will be bought and that the purchase price for this harvest is 11 denars for “Smederevka” and 12-13 denars for “Vranec”.

During the whole protest, the growers were accompanied by the Mayor MitkoJanchev and the MPs from Kavadarci, Daniela Koleva and ZoranJovanchev.