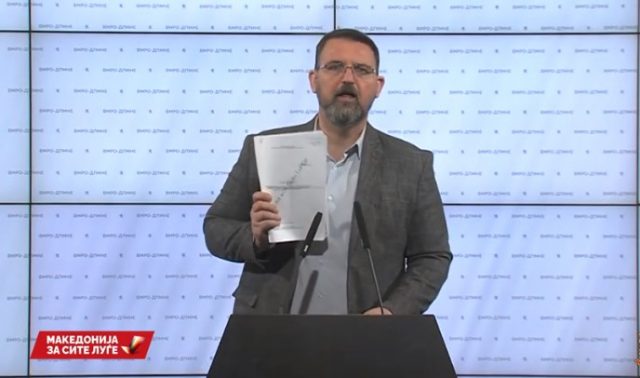 Blocking of roads and sections, establishment of a new mode of movement, blockade of space; establishment of checkpoints; field searches and searches; monitoring social networks, etc. are part of the plan of measures and activities of the government led by SDSM/DUI which is in force and which clearly indicates “shortage of electricity and rising electricity prices”, followed by “real security challenges that may reflect economic, social and “and security incidents with negative consequences,” said VMRO-DPMNE spokesperson NaumStoilkovski at Tuesday’s press conference.

The opposition party spokesperson re-presented a document which indicated that the Interior Ministry had been preparing for a “long and difficult energy and economic crisis” for two weeks. The plan, Stoilkovski said, would not end on December 9th the crisis situation in Macedonia introduced due to the energy crisis, because it obviously will not end any time soon.

“The plan I hold in my hand clearly indicates what the real energy crisis is, that the situation is catastrophic and that SDSM/DUI do not have a strategy to get out of it. On the contrary, this plan indicates dramatic long-term situations with anxiety among the citizens and a plan that envisages disturbing public order and peace,” Stoilkovski said.