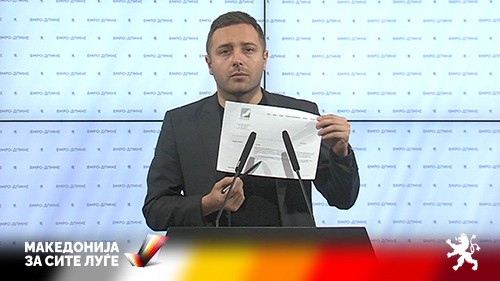 As we promised at the tribune this weekend that we will announce where the people’s money ends up – in the pockets of the SDSM staff. Today we continue with the disclosure of perhaps the biggest businessmen from SDSM. Being a lawyer has become the most profitable profession in SDSM, said VMRO-DPMNE spokesperson Dimche Arsovski.

“After the Kaleska-Vancheva law firm that collected 55,000 euros from legal services, now we have the second lawyer who earned easy money from SDSM without much effort, and a month ago he became the second person in the ruling party. The Secretary General of SDSM Mile Zechevikj, from legal services from 2019 to 2021 has collected over 30,000 euros from only 3 municipalities managed by SDSM staff. The Municipality of Negotino, the Municipality of Probishtip and the City of Skopje, while under the SDSM leadership, in just 2 years enabled and allowed the Secretary General who is currently SDSM, Mile Zechevikj as a lawyer to collect over 30,000 euros,” the spokesperson said.

“He earned so much from only three municipalities, who knows how much more money his law firm took from other institutions and public companies,” noted Arsovski.