Home Macedonia Opposition demands that institutions answer whether MP built illegally and whether there... 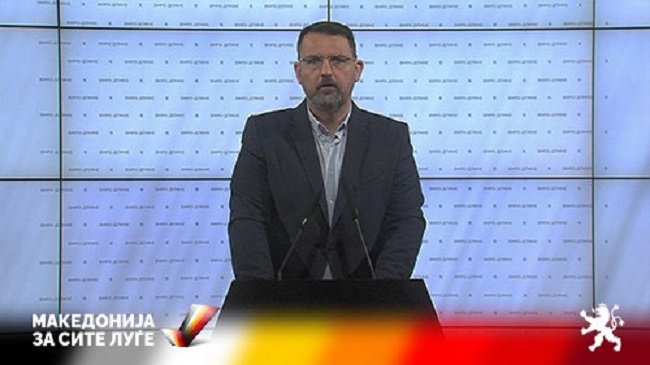 Darko Kaevski, the youngest millionaire from the ranks of SDSM, at the age of 30 and with an administrative salary from the Agency for Youth and Sports manages in the same year, 2020, to acquire a new apartment in Skopje and build a luxury house, a hacienda in Mediterranean style, with swimming pools and all amenities, in Skopje Volkovo, said VMRO-DPMNE spokesperson Naum Stoilkovskiat Monday’s press briefing.

“Darko Kaevski has not said a word for three days whether there are documents for the construction of the luxury villa, nor does he say whether there is an approval for digging a pool, nor for demolishing the old building. Let me remind you, on the property of the immediate family of the young millionaire and SDSM spokesperson DarkoKaevski, a building was legalized, which in 2020, according to photos from Google, was demolished, and in its place sprouted a luxury hacienda. And here are two main questions: Does DarkoKaevski have a construction document issued by the municipality then led by SDSM? As a question about the source of the money, how does he build a luxury hacienda with an administrative salary and buy a 65-square-meter apartment in Skopje in the same year?” Stoilkovski asked.

“The institutions have the responsibility to do that because DarkoKaevski is an MP and spokesperson for the ruling SDSM party, a holder of public office before and during the construction of the luxury villa. The institutions should not be silent, did Kaevski build illegally, is there any evidence for the origin of the money. The silence of the institutions and the silence of SDSM must not be seen beyond an attempt to cover up the scandal. They have been in power for five years, they have been sinking into crisis and poverty for five years, only SDSM officials are multiplying their wealth and enjoying luxuries. Every day spent with SDSM in power is more expensive than early parliamentary elections,” Stoilkovski noted.