Home Macedonia Mickoski: If the proposal is accepted, there will be complete assimilation, and... 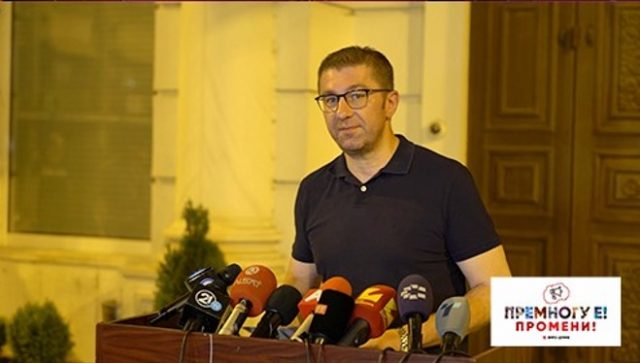 The leader of VMRO-DPMNEHristijanMickoski,in a phone interview with a political TV show during the nationwide protest “Ultimatum, NO THANKS”, spoke about what are the critical points why the French proposal should be rejected. Mickoskistressed that if this proposal is accepted, there will be complete assimilation, and it also gives Bulgaria a tool when it wants and how it wants to block Macedonia from being a member state of the European Union.

“In the documents that have been made available to the public, there are practically several essential things that we have to reject. The first is that one of the documents refers to the protocol of the second intergovernmental conference with Bulgaria where history and education and monuments and culture are practically located, all that is contained in the first resolution of the Bulgarian Parliament of 2019 and if we accept it, if we accept that protocol, we are practically facing complete assimilation.  And the second one is in the first document, which is practically the negotiating framework in point 5 where we have several conditions. The bilateral agreement, not only the Prespa Agreement, but also the Good Neighborly Treaty are part of the offered negotiating framework. Those are the two essential things that we have to reject,” Mickoski said.