Home Macedonia Macedonian citizens would NOT accept the start of EU accession talks at... 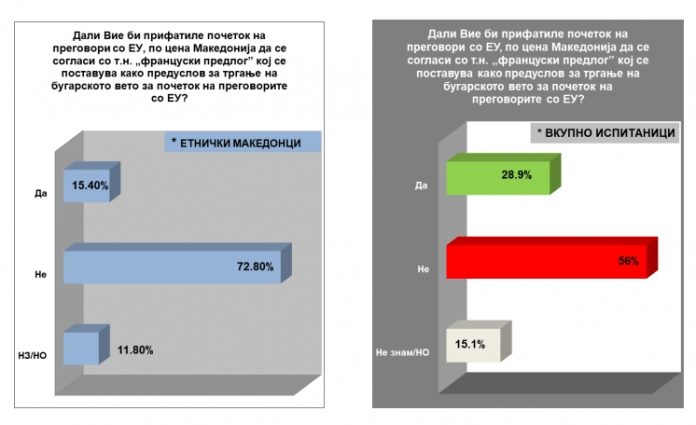 The Institute for Political Research from Skopje (IPIS) conducted a short telephone survey in the period between July 4 and 6, 2022 on 1114 adult respondents at the level of the Republic of N. Macedonia.

In the survey, citizens expressed their views on their support for political parties, as well as on certain current issues at the moment.

As many as 72.80 percent of ethnic Macedonians and 56 percent of the total number of respondents would NOT accept the beginning of accession negotiations with the EU, at the cost of Macedonia agreeing to the French proposal.

Most of the Macedonian respondents (62.80%) believe that the new proposal is the same as the previous one with minor, cosmetic, non-essential changes.

Out of the total number of respondents, only 28.8% believe that the proposal is new, and 48.2% claim the opposite.

Of the surveyed ethnic Macedonians, as many as 67.7% declared that they support the protests rejecting the so-called French proposal.