Home Macedonia Levica shares new details: The incident at Skenderbeg was organized by the... 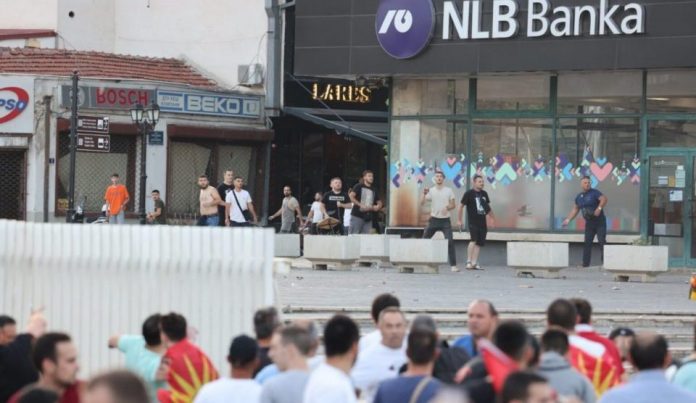 The opposition party Levica has released new information regarding the incident at the Skenderbeg Square, which it claims to have received from a whistleblower from the Ministry of the Interior:

According to a whistleblower from the Ministry of Internal Affairs, Levica learned that the incident at Skenderbeg Square was organized by structures of the state security services, under the directive of the pro-Bulgarian government of SDS and DUI.

While the procession of protesters was moving from the Gotse Delchev bridge to the intersection at Skenderbeg Square, provocateurs of the civil services, in coordination with PS Bit Pazar and DUI staff, headed in two groups through the stairs of the underpass at the former restaurant “Menada” – one towards the “De Koka” hotel, and another on the platform of the newly built square.

The first group stones the first row of cafes in the bazaar looking from the Skenderbeg Square, as well as the De Koka Hotel along with the parked cars in the parking lot. The second, from the platform above the underpass, shoots the protesters who are coming out from under the underpass in a procession. The two groups disappear from the other side of the bridge near the former “Ilinden” department store, in coordination with the police.