Home Macedonia Mickoski tells Prva.rs: Government should listen to the people and say NO... 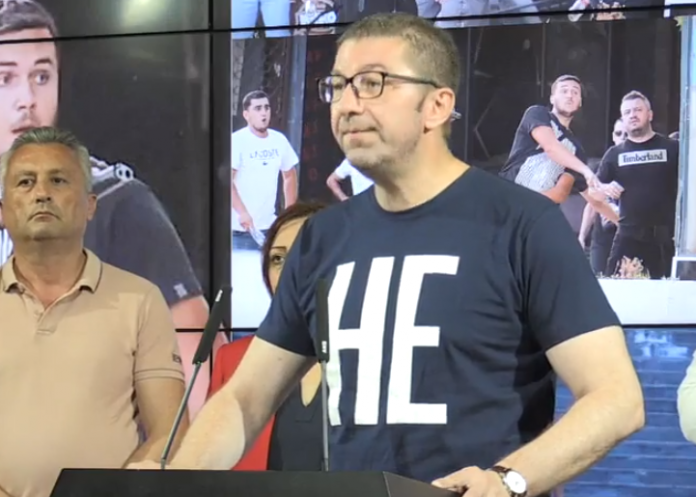 Question: Mr. Mickoski, when did the protests start and what are the basic demands of the protesting protesters?

Answer: So the government should say NO, because the last modified proposal that we received represents nothing but a classic assimilation of the Macedonian people and the Macedonian identity.

Practically, all the Bulgarians’ claims that we are Macedonians are some creation of Tito’s Yugoslavia and that we were Bulgarians before and that we do not speak our Macedonian language which was codified there as early as 1945, that nothing existed, that it was all Bulgaria and that practically our Macedonian nation and people have existed since 1945 and that is unfortunately part of this French proposal which contains all the Bulgarian positions. We cannot accept this last proposal, neither as a people nor as a party. Now there is this corrupt elite in a government that has no rating, VMRO-DPMNE is a party that has two and a half times more rating than this government. and everything just to survive a few more months where it is. It is the main demand of the protesting citizens that the Government withdraws from accepting the French proposal and say NO. A few days ago, they organized an incident. We have identified five people who were shooting at the people. They shot at the people. The people literally went to the guns with their bare hands and it could be seen in pictures and videos. Imagine if the people went to guns with their bare hands, how far it would go.

Question: Tell me how you see the epilogue of all this?

Answer: The Government must step down. If it accepts this proposal then the fate of the country will be sealed. The thesis in which they say ‘accept the proposal, sit at the table and negotiate, and if you don’t like it leave the table’ is ridiculous. Well, we are now at the table and now we are negotiating about our identity. Why should my problem with Bulgaria, if we accept this, be a problem for the whole EU. That is the biggest problem, the Bulgarians want this not to be a problem anymore because they are now isolated, but for Macedonia to be a problem with the EU. That is the main issue.