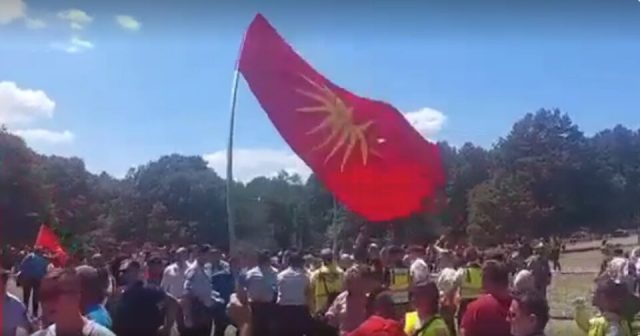 New footage has arrived of Tuesday’s events at Mechkin Kamen in Krushevo. On it, one can see how the police of Interior Minister Oliver Spasovski blocked the people, and Prime Minister Dimitar Kovachevski was booed. Macedonian citizens were not allowed to approach the celebration of Ilinden and celebrate traditionally, and as they say themselves, they were pushed away by the police.

VMRO-DPMNE Vice President AleksandarNikoloskiinformed on Tuesday about this partisanship of the celebration.”

Unfortunately SDSM failed to overcome itself, in fact certain people who were part of this delegation of ours are forbidden to access here, I don’t know what they are afraid of, they are probably afraid of the people, and they see and understand even with party activists they failed to gather people at MechkinKamen, because MechkinKamen can be filled only and exclusively with Macedonian people who come with an honest thought and not under a political order,”Nikoloski stressed.