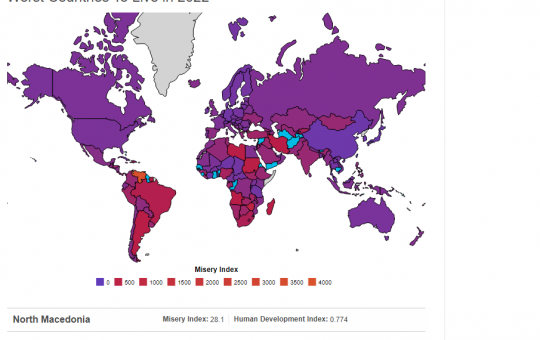 Macedonia ranks second, third if Turkey is included, at the top of the list in Europe according to the Misery Index. This index, which is a combination of the annual inflation rate and the unemployment rate, was created by the American economist Arthur Melvin Okun, and was especially popular in the 1970s with the emergence of stagnation, said VMRO-DPMNE in a press release on Sunday.

The opposition party warns that the Misery Index is yet again in the spotlight around the world as inflation rises and unemployment remains relatively high. Through the misery index, as explained, one can determine a country’s economic suffering from inflation and unemployment, because higher unemployment leads to lower income overall, and higher inflation leads to higher costs of living.

“When countries have high unemployment rates and high inflation, people don’t have enough income to even buy basic things. Such is the case with Macedonian citizens. High inflation is also present in the Baltic countries, but they have low employment rates, which makes them less economically and socially vulnerable than Macedonia”, reads the press release.