Home Economic Filipov: Business communities are the ones who have to settle trademarks under... 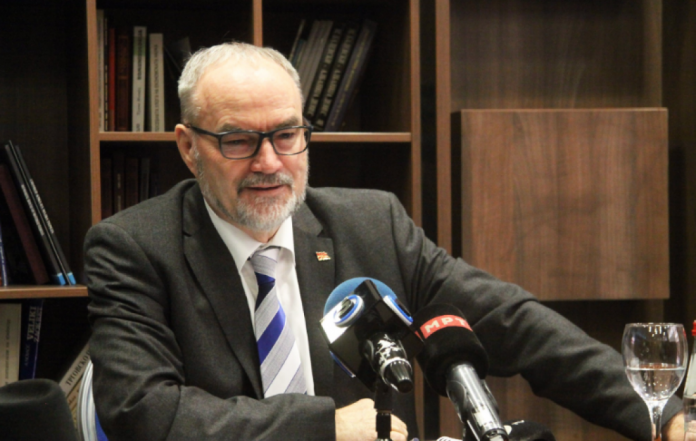 Business communities are the ones that have to settle trademarks under the Prespa Agreement. An international group of experts is here to assist and guide them, i.e. to say whether they fall within the framework of international law and the rights of both countries.

This was stated today by Gjorgji Filipov, head of the Macedonian delegation to the International Group of Experts on Commercial Names, Trademarks and Brand Names, in a press statement at a roundtable with business communities in the Chamber of Commerce, attended by representatives of the Ministry of Foreign Affairs, the Expert Group and civic organizations, organized by the Center for European Strategies Eurothink.

He assesses that this issue is in the interest of resolving both economies and consumers of both countries, in order not to confuse the market and considering further development of the trade exchange between Greece and Macedonia, which the statistics show in the first nine months of this year increased by ten percent.

“The trademark issue has probably sparked much more political interest, and there is no need for it because it is a business problem, which should end with a deal. The ultimate goal is to have no confusion among consumers whether they are buying from Greece or Macedonia,” Filipov said.

He believes that some businessmen do not have sufficient knowledge of this, and do not consider it to be their issue, although Article 1.3 zh, of the Agreement specifically states that business communities are the ones who should ultimately resolve these issues and the international group of experts is here to help them do it in accordance with international law.

“It is high time for the chambers of commerce to form their own joint teams, and the chambers of commerce from the neighboring country to do the same and start concrete talks on the ground. Chambers need initiation, we are constantly re-reading that article, that business communities should talk, because it is a private law of an economic entity, the state cannot take away those rights and negotiate on their behalf. For example, a trademark is worth even more than the company itself,” Filipov said.

Regarding whether three years are enough time to resolve the trademark issue, he says the common goal is for the two countries’ economies to continue working successfully, and that it may be resolved by 2022.

“Businesses in both countries are not responding as sensationally as journalists and politicians have to Prime Minister Kyriakos Mitsotakis’ proposal promoting the new trademark. Communities have reacted wiser, businessmen have one interest that is to increase profits, and it can take up to three years for these issues to be resolved. If we go beyond just international law, everything can be resolved easily and quickly. However, because it is burdened with political issues, so far we have not been able to protect EU brands, because a priori have been denied such a title because we are not a member of that European Intellectual Property Office, they are a member and are normally an asset,” said Filipov.

He pointed out that the Republic of Macedonia is now the only country in the world that contains the name Macedonia and we are in a slightly different position, we no longer have a reference, but we have much greater rights.

“There are about 3,200 companies in the country that contain the word Macedonia, in Greece there are about 3,500 of those companies. If the business community reaches an agreement, then there will be no confusion in the market that won’t bother the consumers either, that’s the basic thing. Nothing will be imposed by force, but by mutual cooperation and mutual agreement of the business communities,” he said.

The international group of experts was formed in mid-June, and so far only one meeting has been held. It is composed of five experts from North Macedonia, five experts from Greece, one expert from the World Intellectual Property Organization and is expected to have one or two experts  joining from the European Intellectual Property Office. The second meeting is expected to be held in Athens by the end of the year.