Home Macedonia Manipulators talked to Zaev and introduced themselves as Greta Thunberg and her... 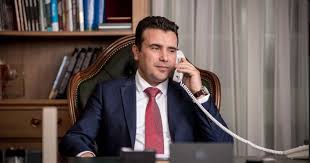 “A few days ago we unveiled a hybrid attack on the office of the Prime Minister, abusing the identity of the young eco-activist Greta Tunberg,” announced Marjan Zabrcanec, PR adviser to Prime Minister Zaev as part of a misinformation discussion at the e-Society conference.

In his speech, he said that the manipulators used branded email addresses and phone numbers, and through an official request to the Macedonian diplomatic mission, managed to schedule and conduct a telephone conversation with Prime Minister Zaev, posing as Greta Thunberg and her father. Certain parts of the conversation were suspicious to the prime minister and his advisers, but the decision was made to move the conversation to the end in order to dispel suspicion.

“Immediately after the conversation ended, we did all the checks to verify the identity of the interlocutors, and today we can say for sure that we have unveiled a hybrid attack on the prime minister’s office. After the disclosure, we contacted Greta’s family, informed them of all the details, informed them that we would make it public, and from there received a response that they too were upset by such news, that they would report abuse to the authorities, and they are very grateful that we have informed them about this abuse”, added Zabrcanec.

According to him, this case of hybrid attack is much more sophisticated than the case with the Russian pranksters, but the careful communication has allowed it to be exposed and publicized. Zabrcanec added in his speech that such sophisticated hybrid attacks on democratic governments aim to shut down and frighten open societies, but that the Macedonian government does not intend to depart from the openness and transparency it advocates.