Home Macedonia The trial of the helicopter crash near Strumica begins 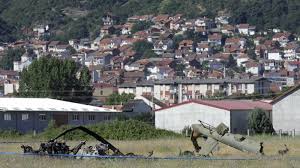 The prosecution’s and defense’s opening words in Strumica today began the trial of the helicopter crash after more than five years, having been postponed twice before.

The accused are Julijana Spirovska, then director of the PE Macedonian Broadcasting, Dragoslav Radeski and the head of the public office. The indictment charges them with serious offenses against general security.

The defendants pleaded not guilty, and their lawyers said the blame for the tragic crash could not be sought by prosecutors and that the 120-meter unmarked antenna pole, which hit the helicopter, was not the reason for the deaths of four MoI pilots.

The defense considers the accident to be solely due to a number of factors or causes, of which there are several systemic weaknesses in the organization of air traffic safety in the country and identified weaknesses in state institutions such as the Civil Aviation Agency, M-NAV and MoI as the owner of the helicopter and employer of the deceased pilots and the overall organization of the use of helicopters in the performance of flights, especially using night flight equipment.