Home Macedonia Dilemmas over the proposal for interim MoI minister or is Zaev running... 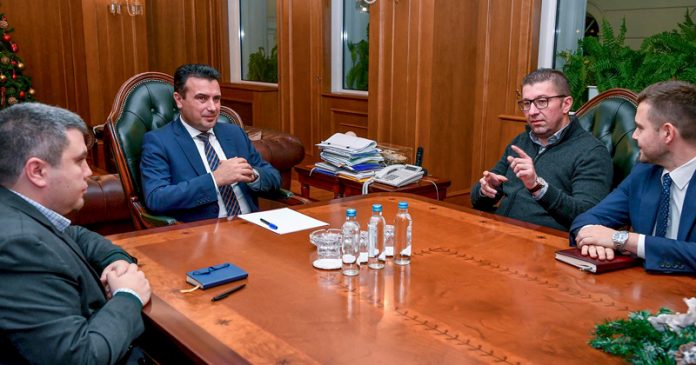 VMRO-DPMNE opposition leader Hristijan Mickoski, after meeting with leaders of the ruling SDSM and DUI on Saturday, Zoran Zaev and Ali Ahmeti, did not announce the name of the interim interior minister’s proposal in the caretaker government that would conduct early parliamentary elections on April 12th.

But the media has learned that it is the ARM Colonel Dragan Kovachki, who has a flawless professional career and retraining at prestigious NATO member military training centers. And that this is a military person after the conversation in the Government, Zaev also confirmed to the media.

And while Ahmeti, without revealing the name of the proposed candidate, said he was a professional who was not known as a political activist in civilian life, there was a dilemma for his coalition partner Zaev whether that appointment would be constitutional. He, orchestrated by his Justice Minister Renata Deskoska, who by the way nominates herself as a Macedonian member of the Venice Commission, enters into legal interpretations and assumes the role of constitutional judge.

Experts should assess whether Article 97 of Zaev and Deskoska refers to defense and police officers within the same department or to transfers from one to another, requiring at least three years of civilian life.

Based on Zaev’s interpretations, it turns out that Mitko Cavkov’s previous appointments as a police chief in the police in the previous MoI in the so-called 2016 Przhino government were unconstitutional. Also the appointment of Siljan Avramovski, who in 2004 became the Minister of Interior in the SDSM government from the then State Security Service, and before him from the same position as him, the head of the MoI became Ljube Boskoski in 2001 in the Ljubco Georgievski government during the clash, and back in 1998 when Zaev’s current coalition partner Pavle Trajanov became head of the Macedonian police. And it was never opposed, especially not by SDSM.

The examples of Slavjanka Petrovska, who is proposed by SDSM as deputy minister in the Ministry of Interior, can also be mentioned, and she comes to this position from the structure of the police. Or Zoran Ivanov, who was a colonel before becoming director of the Intelligence Agency, and Bekim Maksut, who also became deputy defense minister, also from the ARM.

Thus it becomes quite clear that Zaev’s desire to question the appointment of a position that is temporary until the new government is formed is an attempt to delay as much as possible the confrontation with the people.