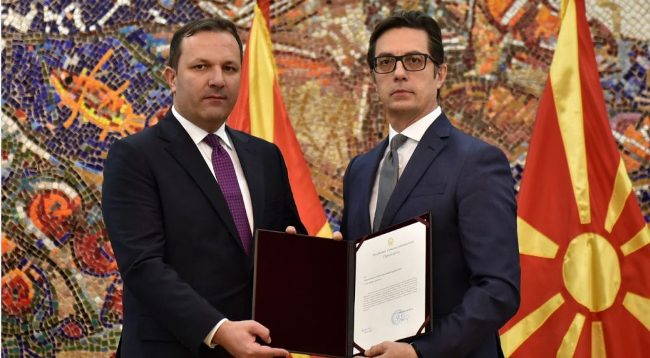 President Stevo Pendarovski on Friday gave Oliver Spasovski the mandate to form a caretaker government after Parliament at a session confirmed the resignation of PM Zoran Zaev.

“Under Article 84 of the Constitution and according to the Law on Government, I nominate Oliver Spasovski to be the mandator in charge of forming an interim government to organize the parliamentary election following a proposal of the largest political party that is part of the ruling majority,” President Pendarovski said speaking at a ceremony in Villa Vodno.

Addressing the event, Spasovski said he was grateful for the honor and responsibility he was entrusted with.

“Our job is to make sure the country keeps making progress, our jobs is to ensure that fair and democratic election is held. Also, all institutions should continue to work with the same dynamic they have been working with so far,” said Spasovski.

After being given the mandate, Spasovski at a Parliament session should present his program and that of the interim government, which is expected to be elected by MPs by midnight at the latest.

President Pendarovski, his office said, will meet in Villa Vodno with the members of the new government after it is elected in Parliament.