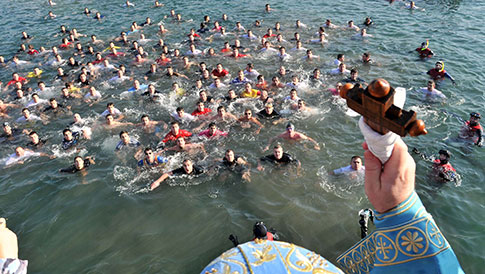 Forty-five people have applied so far to take part in the traditional cross catching in the river Vardar in downtown Skopje on January 19 on the day of Vodici – Epiphany, MIA reports from the Skopje Diocese.

– Applicants must be over 18 years of age. There are no women among the registered so far. Candidates first receive a free medical examination in Sport Medicine, which is mandatory, after which they register with the Macedonian Archbishopric – informs the Skopje Diocese.

The throwing of the ritual cross into the waters of Vardar will take place on January 19 at noon from the bridge near the Holiday Inn Hotel and will be performed by the Head of the Macedonian Orthodox Church, HH. Stefan.

Earlier, Archbishop HH Stefan at 9 o’clock will officiate the Golden Liturgy in the Church of the Nativity of the Most Holy Mother of God, and at 11:45 o’clock the Divine Liturgy will be headed to the place where the traditional religious event will be held.

Except in Skopje, crosses will be thrown in the waters across the other Skopje municipalities and cities in the country.