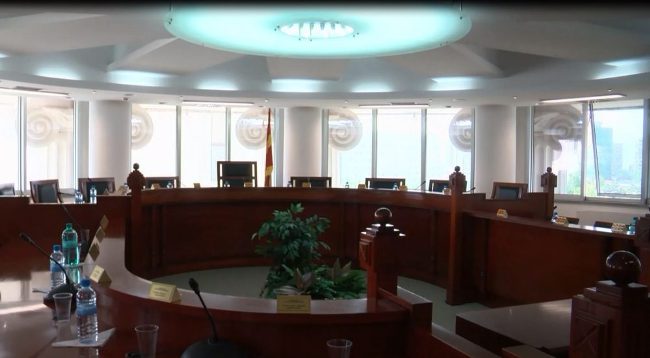 The constitutional and legality assessment initiatives of the Law on Amnesty as a whole, submitted by Todor Petrov of the World Macedonian Congress and the initiative on Article 2 of the same law submitted by lawyer Josevska Anastasovska, were considered by the Constitutional Court as the first of the two.

The views of the constitutional judges were divided.

Constitutional Judge Naser Ajdari, explaining the initiatives, said that constitutionality claims should be rejected as unfounded because the court has already ruled on the law.

– According to the Rules of Procedure, when the Constitutional Court on an earlier initiative issues such a question, the only solution is to dismiss this proposal as unfounded. The Constitutional Court cannot be placed in the role of the Assembly, but it decides whether the Assembly had a constitutional right to pass the law and therefore such questions about the right to vote are unfounded, Ajdari said.
According to Judge Jovan Josifovski, these two initiatives are detailed and should be accepted, especially as he maintains in his earlier position that the law is unconstitutional.

– It is undisputed that the Assembly grants amnesty, but Article 2 that transfers the right of decision to the court. This is not the first time an amnesty has been granted, this is the sixth case of amnesty. The Assembly granting amnesty cannot transfer the right of the court to decide arbitrarily who will receive it and who does not have an amnesty for the same criminal event. For these reasons, I believe that the law is unconstitutional, Josifovski said.

Constitutional Court President Sali Murati said that his personal view is that all legal norms must be functional and that the adoption of such laws for such events does not strengthen state values.

– I will never support such amnesties that are to the detriment of the state. Being this law in its entirety we will not discipline perpetrators and do not strengthen state values, Murati said.

Judge Osman Kadriu pointed out that it should be accepted that the legislator does not grant amnesty for acts that endanger the integrity and sovereignty of the state.

Constitutional Judge Elena Goseva said there were many inconsistencies and that the proposal to reject the initiative as unfounded should be rejected.

– Did the Assembly of the previous amnesties decide what it covers and what crimes. When the amnesty was passed in 2001, it was not clear what kind of acts were being amnestied. I do not want to go back on such painful topics, but we cannot now claim that the law is constitutional, Goseva said.