Home Macedonia Opposition puts up a banner in Parliament asking Joveski how long he... 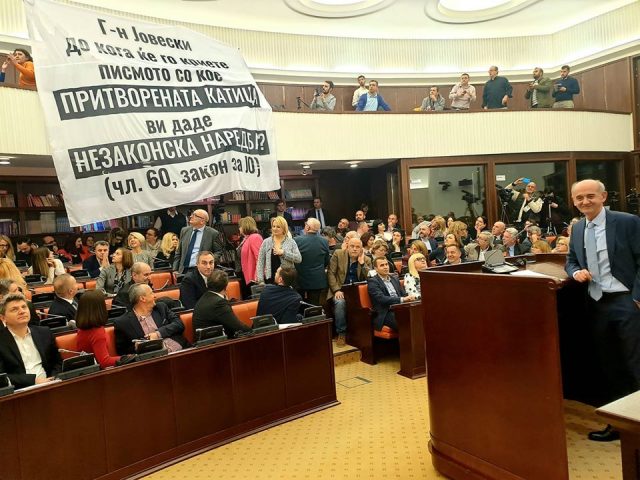 During the Public Hearing on the PPO Law after State Attorney Ljubomir Joveski
appeared at the rally, the opposition VMRO-DPMNE transparently protested his
speech, referring to a letter sent by Katica Janeva to Joveski concerning the SPO
cases.

Let’s not forget that Jovevski is extremely close to the SDSM government. As
evidence of his closeness to the current government, many cite the meeting between
Filip Medarski, Prime Minister Zoran Zaev&#39;s lawyer and State Attorney Ljubomir
Joveski at a gas station in Skopje&#39;s Karpos, where according to our information will
receive all items from SPO. According to them, these are the six main tasks that
Joveski must fulfill in order for Zaev to return &quot;to the form&quot; of the political scene.
In turn, Joveski would receive from the government and Zaev thing like: increased
budget, new prosecutors and investigators, media support for all actions, etc.
Exactly two of the three points Joveski receives under the new Law on Public
Prosecutor&#39;s Office that he defended today in Parliament.